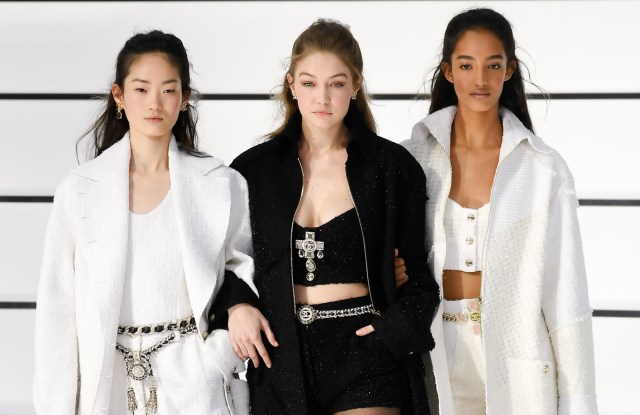 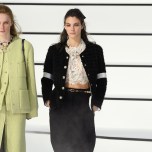 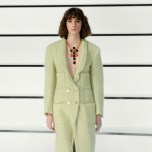 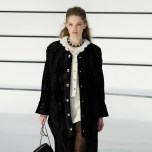 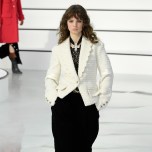 Who isn’t rooting for Virginie Viard at Chanel? So after her show on Tuesday morning, there’s no easy way to say it: Confusion reigned. Following a beautiful, deftly focused couture outing in January, for fall Viard sent out a confounding lineup that stunned in its disarray. The disorder started from the first look out. Make that a pair of looks, as two models walked together Armani-style, only without the sartorial connection that his duets typically share. One wore a light green skirt suit, the other, a sporty jacket over a lace cropped top and wide pants, a row of brass buttons unbuttoned up the side of each leg.

In her show notes, Viard referred to the pants as jodhpurs. They turned into a rare unifying theme. Others were a scalloped motif; folkloric, “seven-league” boots inspired by a pair Karl Lagerfeld owned, and a general sense of transition-in-progress to a sportswear sensibility. One can argue the merits of such a shift for Chanel, but not on the strength of this collection.

Overall, Viard seemed to embrace an anything-goes attitude. Literally, as some attractive suits and dresses got lost in a cacophony of random thoughts. Would-be Jolie Madame suits, only slit high in front. Short, lantern-sleeved shift dresses. Endless varieties of jackets and coats in oddly styled looks. Together, they made no sense as a collection. Individually, some made no sense for Chanel, period. At this level, HotPants over sheer, dotted black hose are best served with a side of irony.

It’s been a year since Lagerfeld’s death, and it’s now essential for Viard to show a consistency of vision worthy of the house name and legacy. With her last ready-to-wear collection, she telegraphed a smart inclination to move Chanel in a younger direction. Her couture effort suggested she could achieve that while delivering a clear seasonal message and without sacrificing the chic that should always emanate from Rue Cambon. Given the strength of that show’s messaging — and its lovely clothes — let’s hope this misstep for fall was an aberration.

Sex, Sun and Survival: A Look at Chanel’s Charmed Life in the War Years

Everything You Need to Know About Virginie Viard