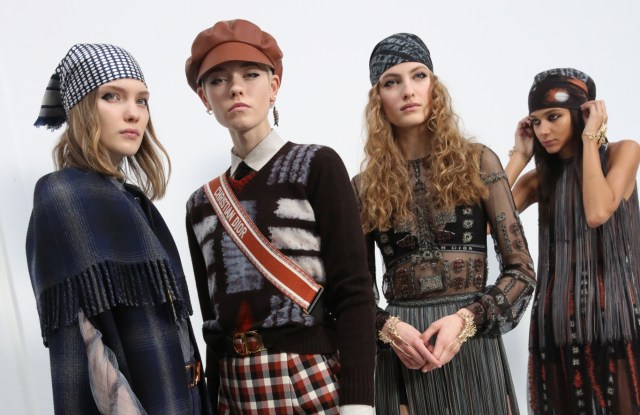 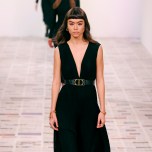 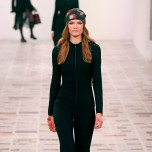 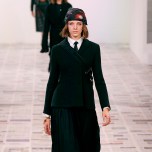 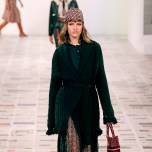 “CONSENT,” flashed three big neon signs suspended from the ceiling, one each in yellow, red and green. They blinked on and off inside the tent installed at the Tuileries Garden for Maria Grazia Chiuri’s Dior show. Additional signs around the perimeter proclaimed, “Patriarchy = CO2,” “Patriarchy = Repression,” and “We Are All Clitoridian Women.”

The timing of this particular installation was uncanny, the day after Harvey Weinstein got his comeuppance in court, convicted of rape and a criminal sexual act. The set was the work of the feminist art collective Claire Fontaine (the duo of Fulvia Carnevale and James Thornhill). The name of the show, “I Say I,” is translated from “lo dico io” an exhibit of Italian women artists opening next month at Rome’s National Gallery of Modern and Contemporary Art, and sponsored by Dior. The exhibit takes its name from a piece by the Italian art critic and feminist writer Carla Lonzi. (This show drew on ample material; the press notes had footnotes.)

Chiuri’s feminist dedication is admirable, as is the free rein she gives to the artists she enlists for her sets. But this messaging crossed over from pro-women activism to an unsubtle subtext of “men suck.” There was no small irony to Claire Fontaine’s sledgehammer slogan art, considering that the guy who’s paying for it, Bernard Arnault, more than qualifies as a card-carrying member of the carbon-dioxide patriarchy (you know, head of one of the world’s largest luxury conglomerates; on any given day, the first, second or third richest person on Earth). At least the patriarchy’s good for patronage.

That’s either amusing or problematic, depending upon your point of view. Then there’s the fashion take. Chiuri called the collection “a visual diary,” undertaken after she came across a box of photographs from her teenage years, with pictures of herself and her mother. That led her to reconsider the Seventies. “It was important [then] for women to change their style, to have the freedom to do that,” she mused, noting that Marc Bohan, then at Dior’s creative helm, modernized the house by offering women not a single seasonal silhouette, but many.

That’s what Chiuri did here, with a vast array of clothes rooted in a sportswear sensibility. She opened with a modified-Bar pantsuit. This went with a shirt and tie, a motif that carried throughout the collection, perhaps intended as a statement of strength. There was a bit of a Seventies mood, particularly in the tailoring, the outerwear and the fringe detailing that carried through, as well as in the ample showing of bold, sporty checks. A subtle reprisal of the paramilitary styling that has become something of a signature also imposed some structure. But there were too many offshoots of a sportswear core that wasn’t strong enough to hold through 85 looks. And in the end, the set signage trumped the fashion message.