Germanier is making a case for folding the evolution of his brand into the wider revolution of the textile and fashion industries. 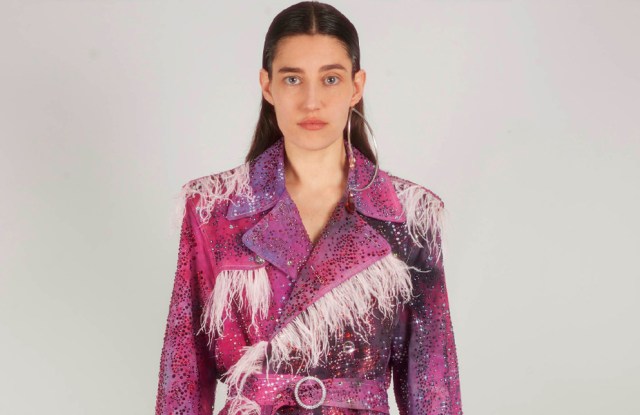 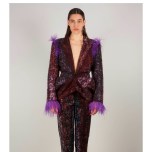 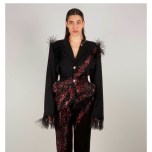 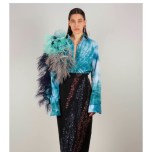 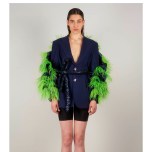 The glittering triptych hanging on the walls at Christie’s said it all: in the right hands, trash can become treasure — Germanier’s creed since the beginning. Those Swarovski encrusted tableaux? A couple of weeks back, they were cardboard boxes he found during Paris’ January strikes and turned them into his decor. “Well, I wasn’t going to create a disposable set, was I,” Kevin Germanier said.

The success of his earlier seasons, including an LVMH Prize nomination, seems to have given the Swiss designer the confidence to branch out in various directions at once. The first: the addition of easier pieces that could bring pizzazz to daywear. “Everyone laughs when I call these my basics,” he said. Well, they indeed aren’t quite as it says on the tin. A navy blazer has been reconstructed to include tufts of acid green marabou feathers along the shoulders and arms. A pencil skirt was scattered with lashings of upcycled Swarovski crystals. Six shirts were used to make one blowsy ruffled blouse in mottled pastels. A trenchcoat owed its purple hue to a dye made from tealeaves — Germanier refuses to go with conventional chemical dyes. There was even black, albeit constellated with crystals, in the shape of a black suit with soft origami folds that created a basque effect around the waist.

Another new direction was the more sensual, almost subversive side to the lineup. Instead of outlining the body in classically elegant tailoring that constrained the waist (“someone told me ‘Kevin, wear a dress for an hour,’” he admitted, demurring on whether or not he’d actually tried), he draped and played with transparencies, superimposing layers to let the skin play peekaboo or adding a strategically placed ruffle to avoid a full frontal reveal. They were striking and felt fresh.