"It was a collection about tribes standing tall and being present," said Ackermann after greeting his star client, Timothée Chalamet. 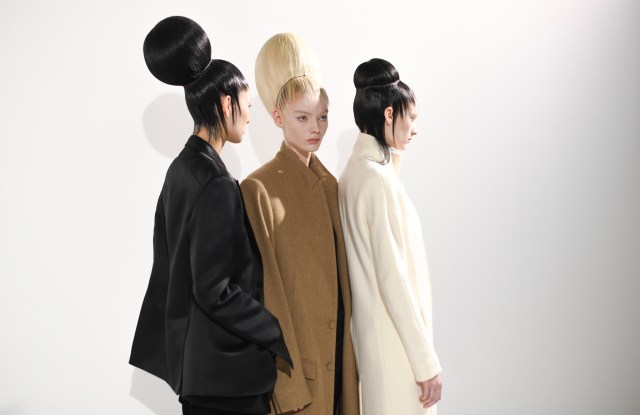 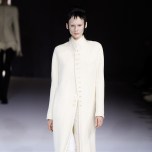 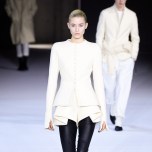 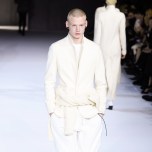 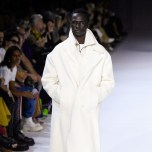 It was the Haider Ackermann runway, but let’s face it, it was the Timothée Chalamet show. The room started buzzing as soon as the front row seat card was discovered for Monsieur Chalamet.

And when he arrived, the mop-haired wonder boy did not disappoint, wriggling out of his backpack like any other scrappy kid on the Paris Metro on a Saturday morning, but keeping his shades on Hollywood-style as he posed in blue velvet jeans, a matinee idol’s white T and lug-soled high tops.

On the runway, there were plenty of looks with Chalamet potential from his go-to for gender-pushing style since the “Call Me By Your Name” days, including a great-looking, citron-bright suit with white satin lapel, a long, lean pinstripe coat, and more streetwise kimono jackets and leather pants emblazoned with fragments of Japanese text.

It was about tribes standing tall and being present, the designer said backstage of his collection, which also featured some Dorothy Parker bon mots here and there. “She is one of my favorite authors, a little sarcastic,” he added. (Unfortunately, Chalamet was not sharing any bon mots himself backstage.)

One could certainly see signs of the tribe of Tilda (Madame Swinton, Ackermann’s other mega-wattage client, who was not front row at this one) in the sci-fi bouffant wigs on Bella Hadid and other models, and in their statuesque black-and-white gowns with jagged cutout necklines, tuxedo jackets with zig-zagging lapels and ramrod high-waist trousers.

For those in search of something more forgiving, Bella’s black, low-slung pleated pants worn with a clingy turtleneck were groovy, and a blouson jacket over a mermaid trailing jersey evening skirt a study in simple chic, while lived-in tailoring (a relaxed camel coat, and trousers with the legs casually rolled up) added a dash of the season’s beloved bourgeois sensibility.

It all made for an eclectic lineup that was a bit thinner on concept and clarity than some of the designer’s other outings, but that didn’t cancel out the fact that there were some very good clothes.