Simon Porte Jacquemus said he approached the coed collection as if it were his last. 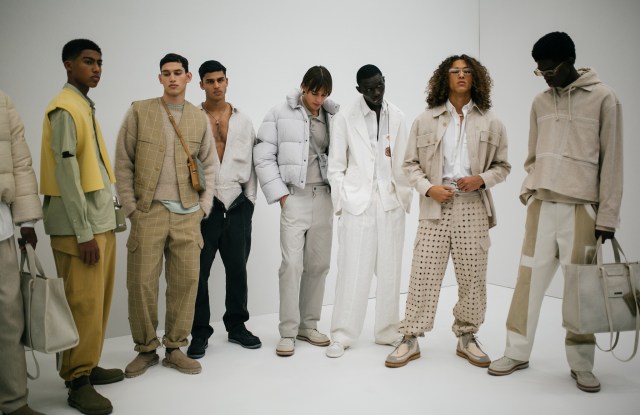 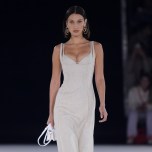 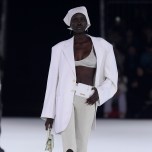 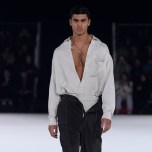 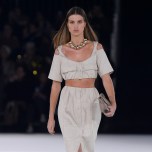 “It’s the first time in my life that I have designed a collection as if it were my last,” said Simon Porte Jacquemus, standing in front of a mood board awash in neutral tones.

The designer likes to make his guests earn their fun. Having practically broken the Internet in June with his 10th anniversary fashion display in a lavender field in Provence, he opted for the mundane setting of the Paris La Défense Arena for his pared-back fall coed show.

Those who braved the journey on day 45 of a nationwide French transport strike had to wait in the cold for 20 minutes or more. Once admitted, they walked through the cavernous concert venue in pitch darkness before taking their seat around a large white square. “I didn’t want any artifice,” Jacquemus explained.

Laetitia Casta opened the show, marking her first runway appearance in almost a decade. She headed an all-star cast including Bella and Gigi Hadid, Doutzen Kroes and Jill Kortleve.

But back to that “last collection” comment. Was Jacquemus preparing to hang up his scissors?

“It’s not the last one, but everyone goes through periods of doubt, whether you’re a tile layer or a designer,” he said. “The state of the world has made me question why I do this job, and my whole team felt the same. We wanted the collection to be much more meaningful.”

That meant adopting a more sustainable approach, focused on timeless classics. The designer recalled the moment when, as a nine-year-old, he tore down a natural linen curtain and made his mother a skirt.

Casta wore a version of it paired with an off-the-shoulder buttoned cardigan that barely clung to her breasts. Even stripped of its usual sun-drenched palette, this was a Mediterranean collection that showed plenty of skin. There were variations on his signature strappy dresses and body-hugging knits, as well as short shorts and minidresses worn with thigh-high boots, some topped with oversize his-‘n’-hers jackets or coats.

The men’s looks, based on a boxy suit shape, were slightly more playful, with details like trompe-l’oeil boxer shorts peeking out from open waistbands. Puffer jackets featured recycled filling, the designer said in his show notes.

Jacquemus said he was aiming for “designs that last” — a sentiment somewhat negated by the flood of new bags on display. They included a horizontal version of the bestselling Chiquito, as well as a dedicated men’s Chiquito with a sport strap.

Overall, there was a more polished feel to the display, reinforcing persistent rumors that Jacquemus is gunning for a job at a major house — though he has repeatedly denied it. LVMH scion Alexandre Arnault’s presence at the show was likely to fan further speculation.

Jacquemus said his decision to switch to coed shows was designed to lighten the load for his team, describing it as a “new beginning” for his label. Perhaps he can add another New Year’s resolution to his list: quit with the amateur show logistics. Charm can only take you so far.