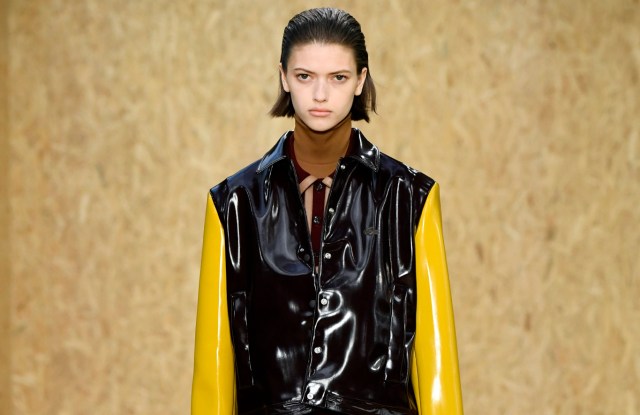 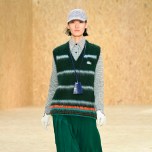 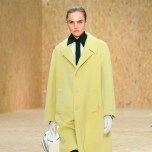 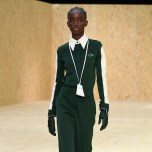 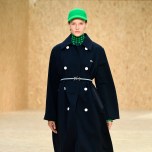 For her third effort at the helm of the French sports label, Louise Trotter zeroed in on the relationship between René Lacoste and his wife, French golf champion Simone Thion de La Chaume. “They were both powerful people in their own right who came together and complemented each other. Their relationship, in their contrasts, was very harmonious,” she said after a coed show that blended the codes of golf and the brand’s tennis heritage.

She recast many of the brands signatures — track pant, trenchcoat and of course, the polo shirt that will come in a lusher double-knit version — in a palette of sophisticated bright colors, blowing out the proportions to telegraph ease in fit and in fabrics. “Today, luxury is comfort,” she said. “Performance can be how you feel, that you get a great fit, that you can wear it day after day and it still looks good.” Cutting much closer to the body, this more tailored but still relaxed silhouette felt in step with this season’s return to elegance while staying true to the brand’s sportier side. One russet colored suit, seen on a female and later male model, was striking.

Golfing touches were blended throughout, like the sleeveless vests in shaggy mohair, or the gloves on some looks. Other accessories also caught the eye: de rigueur mini bags were used as pendants, while a clutch doubled up as a foldable carrier bag. Shoes and sneakers featured kilties, the visually striking fringed leather flap originally used to keep shoes clean. As for the photogenic miniature golf caddy bags, they provoked a frisson of delight — “hole in one” came to mind.