Against the backdrop of the coronavirus outbreak, Marine Serre’s vision of environmental apocalypse felt eerily prescient. 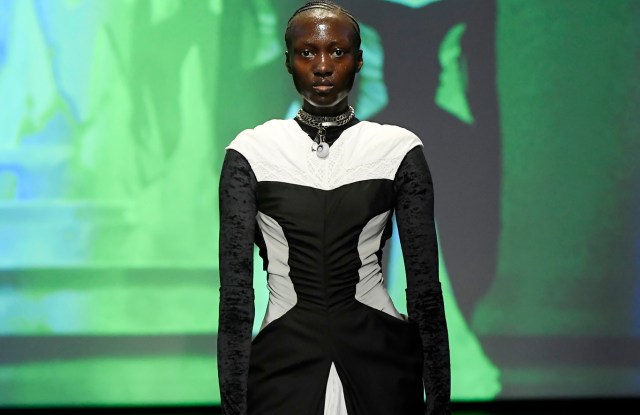 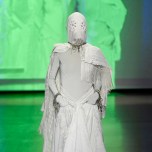 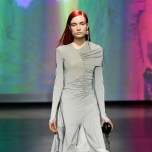 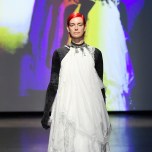 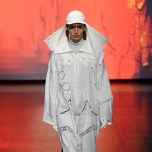 If you’re busy freaking out over the coronavirus outbreak, a Marine Serre show is not the place to snap out of it.

The face masks, cocoon-like padded jackets and cavernous set were nothing new for the French designer, but against the backdrop of psychosis over the spread of the virus in Italy, Serre’s vision of environmental apocalypse felt eerily prescient. For fall, she conjured a sci-fi scenario inspired by Frank Herbert’s classic “Dune.”

The invitation carried a quote from the book: “I must not fear. Fear is the mind-killer.” (Try making that your mantra for the week.)

Her tribe of survivors had scattered over a series of planets, distinguished by distinct styles of dress: some had repurposed white embroidered tablecloths as flowing capes and dresses, while others sought the protective armor of sharp houndstooth tailoring, including an hourglass coat dress with matching face mask.

A handful braved the elements in quilted protective gear, a smartphone strapped to one arm for guidance. With their saturated earth colors, denim jackets and skirts looked like they had been dug out of the sand. They were spliced with upcycled rugs, similar to the ones littering the low platforms where guests sat, Bedouin-style.

The residents of Planet Fuchsia formed a small, but effective pocket of resistance with their hot pink outfits and accessories, including cute moiré handbags and a pillow boa that looked for all the world like a repurposed draft stopper. Half the outfits were made with recycled elements, Serre said after the show.

The concepts were familiar, but her execution is becoming sharper. Standouts included a ruched greige dress that cleverly balanced a cotton petticoat with the athletic élan of thumbhole sleeves, and another, made from a patchwork of black leather and old sweaters, that was worn with a full-face knit mask.

While some of the rigid coat shapes carried echoes of Balenciaga, where Serre worked under Demna Gvasalia before launching her own brand, the his ‘n’ hers black trouser suits with elongated jackets were simply flawless.

And she suggested a bright future may still await the human race, as models including Hannelore Knuts walked out with their children in tow. “It’s important not to fear and just to really be real with what is happening and go deep into it, and then I’m sure we’ll find great ways to continue,” Serre said. Word to the wise.