“Charm as positivity” was the motivation behind Miuccia Prada’s latest elegant escape. 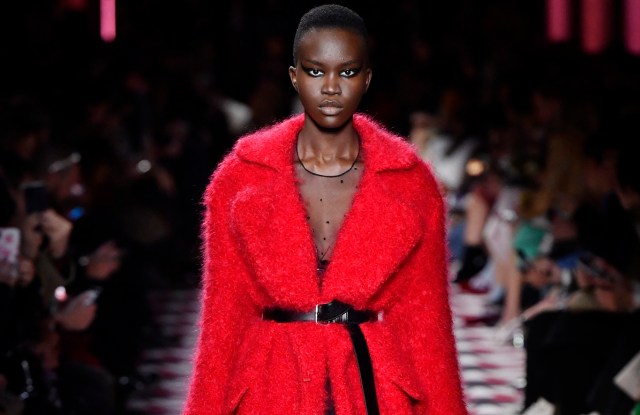 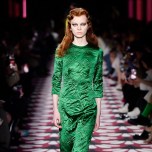 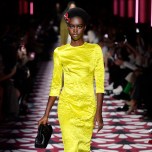 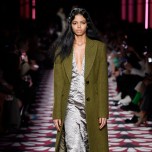 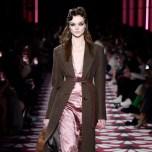 Near the close of a fashion month that has felt like the world ending as we know it — between coronavirus anxiety and Tuesday’s pension fund protest sending armed police into the street, making parts of Paris resemble a war zone once again — Miuccia Prada gave us a moment of pure escape at Miu Miu.

Turning her show venue into a theater with plush patterned carpeting, red velvet seats and rose-tinted columns, she set the stage for a collection that was a reminder of “charm as positivity,” as she put it in her show notes, and really, the power of fashion to spark joy.

Not dressing to succeed, to impress or even to defy, dressing for oneself was what the collection was about, and how a spiky mary jane pump, jeweled hair pin or the unexpected pairing of a sailor top and a long, glossy black leather skirt, can make a day brighter. That’s why we all got into this crazy business, right?

Watching the beautiful parade of long, lean coats, some with high set rows of gold military buttons, and tiny velvet back bows adding childlike reverie, the ankle skimming skirts slit to the thigh with blazers cinched over top, and the puff sleeve and skirt volume dresses with sheer tulle bodices, my mind started drifting to the past. Specifically, I was thinking about Paris between the two world wars, when the city was buzzing with the creative insurrection of art, cinema and haute couture lifting spirits during the Great Depression. (The show space in Palais d’Iéna, designed in 1939 by Auguste Perret, is of that golden era when people seemed to dress up, and have fun, no matter what.)

Maybe Prada was thinking about it, too, based on her melancholy soundtrack of “Cabaret” and David Bowie ruminating on the passage of time, and the generous scattering of crystals in the collection, which could have been a nod to the great showgirls of the Twenties and Thirties, like Josephine Baker. Because who can ever really have enough sparkle? The colors were glorious, too — lemon and lavender and fire engine red. And how did Prada manage to cut a checked coat so close to the curves that it turned into a tool of seduction?

The designer didn’t do any greetings after the show, “for obvious reasons,” her p.r. said, referring to the health situation In Northern Italy that had showgoers speculating all week that Miu Miu would be canceled. But she didn’t need to say anything really, the clothes spoke of joie de vivre all by themselves.