Steeped in calculated artifice (Owens knows how to sculpt a shoulder like Michelangelo), but with a wearable, scrappy sport-street streak. 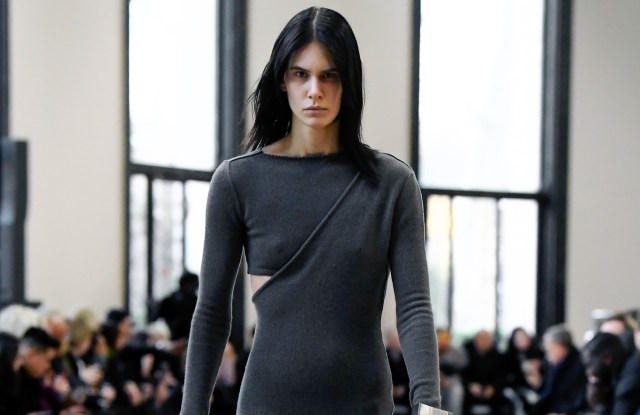 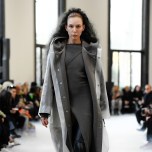 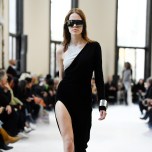 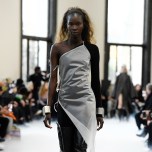 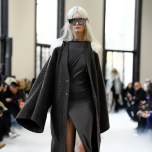 You might have gathered from his galavanting across the California desert in a Moncler kitted-out Airstream trailer (and showing off his killer abs on Instagram), that Rick Owens, the once geeky kid from Porterville, has been on a bit of a nostalgic trip lately. He’s mined his Mixtec heritage and the rock gods of his youth for his runways, first Kiss designer Larry LeGaspi, and now Gary Numan, godfather of electronica and star of the sublimely Rick-titled 2016 doc, “Android in La La Land.”

In true form, the designer contacted Numan, humbly asking if he could remix some tunes for his show soundtrack. And he said “yes,” opening up the floodgates for Owens to explore his teendom in the dystopian Eighties, when Numan’s calculated artifice railed against “the banality of a decaying world” — not unlike the one we’re living in today, plagued by killer viruses and apathetic politicians.

“He’s always considered a C-list David Bowie…but I like that he was more obscure and more underground…he is repetitive, hypnotic, more alien and sleek than Bowie,” said Owens, likening his leather jumpsuits and expressionlessness to a cartoon of a German artist.

The result inspired one of Owens’ more accessible collections in recent memory, still steeped in calculated artifice (the man knows how to sculpt a shoulder like Michelangelo, even on a puffer coat), but with a wearable, scrappy sport-street streak evident in his sexy, draped, wrapped and dragging cashmere knits, including sinewy dresses and bodysuits and more modular layered stretchy staples. Satin gowns were reduced to their element, mere slips of fabric held together with tiny ties, fastened over a spandex bodysuit. How modern.

Also of note re: outerwear: Has anyone made sustainability look so cool as those bonded, recycled clear plastic raincoats? “I’ve poisoned more rivers with black dye than anyone in Paris, but I’m kinda making up for it now,” Owens said of his nod to green. “It’s the new gimmick but it’s a great gimmick and if one-third of it is honest, it’s worth it. I love the idea that responsibility is now part of the fashion vocabulary and conversation.”

There’s a circularity, too, to the way Owens clobbers his past-life insecurities with the platformed heel of fashion. “For a man my age to look back on that period in my adolescence, it’s a sense of completion,” he said (it’s no wonder he’s a hero to so many kids). “That I was able to translate those insecurities and that awkwardness and own it, that’s a nice thing.”