"I wanted to think beyond the 3-D and incorporate movement," Chitose Abe explained of the giant leap in her technique. 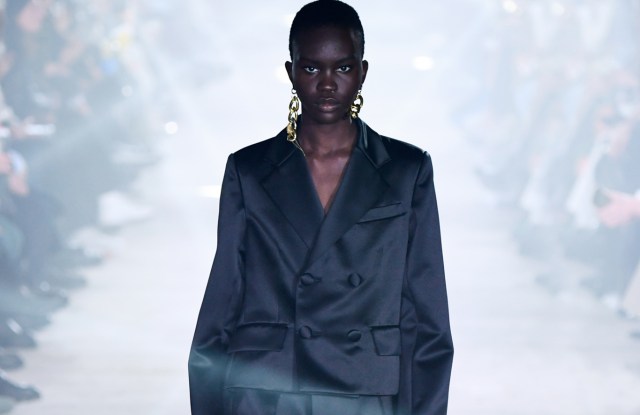 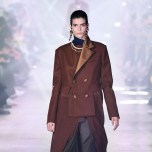 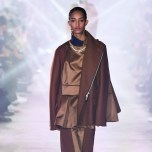 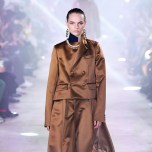 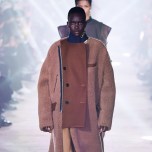 Backstage on Monday morning, Chitose Abe never looked so happy. She was jumping up and down happy. And for good reason, her collection was out of this world.

“I wanted to think beyond the 3-D and incorporate movement,” Abe explained of the giant leap in her technique, which had silhouettes changing shape in motion, thanks to contrasting weights in fabric. “For example, there’s a tuxedo that when it starts moving, you see the detail of a white dress in the back. It’s almost four-dimensional, because movement equates to time.”

If it all sounds a little space-time-continuum (or indeed, Met Museum Costume Institute “About Time: Fashion and Duration” resonant), there was that element — in the Uma Thurman from “Gattaca” voiceover that opened the show, the NASA-sourced cosmic prints on a few looks, even the orange nylon flight jackets and flight suit reimagined into an airy coat and dress.

But her newest hybrid vehicles had a future cast beyond any theme, and indeed, beyond the sport-street sensibility that had been shaping much of her brand aesthetic the past few seasons, spawning that sell-out Nike collaboration.

Instead, she worked a new formality, marrying mannish tailoring with feminine, couture-inspired volumes — pinstripe pants with a black-and-white infanta gown; a Prince of Wales check blazer with an olive green satin belted trapeze top with jewelry details, and a long white button-down shirt with a black pleated half-skirt attached with a thin leather belt.

She brought new lightness to the clothing (occasionally weighed down by heavy construction in the past), splicing her signature Nordic knits with devoré velvet for an easy top over a symmetric brown knit skirt; splicing panels of a caramel-colored, sleeveless Chesterfield coat together with a black pleated-front high-neck dress, and an ivory thick ribbed sweater dress with an ivory trouser skirt for ease of motion.

It all made for a potent take on soft power. And without being too avant-garde tricky, it marked a new sense of play for the brand, underscored by a seasonal collaboration with the Alexander Girard studio on silk prints.

“Every person has a feminine side and a masculine side, that’s what I wanted to bring up,” Abe said. Mission accomplished.