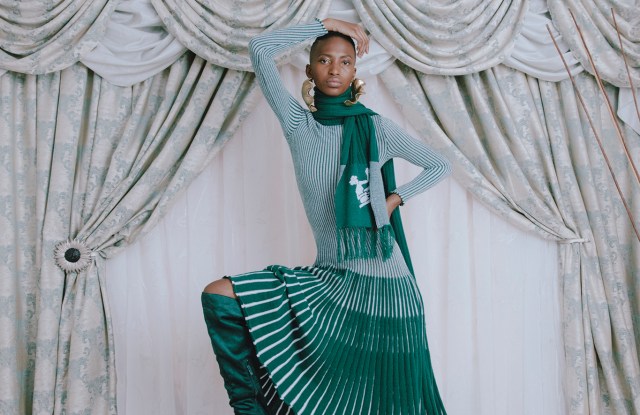 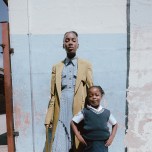 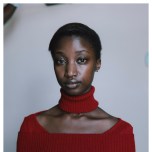 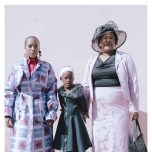 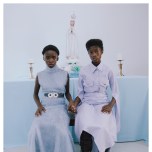 All around the room were oversize images shot by Kristin-Lee Moolman, featuring items from the fall collection against the backdrop of the Ipopeng township in the mining town of Kimberley, where Magugu was raised. The name of the suburb translates as “beautify yourself” in Setswana.

Committed to manufacturing in Africa, the winner of the LVMH Prize for Young Designers produced just 10 looks for his “Anthro 1” fall line as he works to upskill his suppliers.

There were variations on shirtdresses — some with sheer lace insets at the elbow — and feminine pantsuits. A lilac logo trenchcoat came in a check print inspired by the tablecloth in his grandmother’s kitchen, while a shirt and cropped pants featured a stripe motif made by photocopying strips of denim.

Leather bags were handcrafted in Johannesburg and featured the brand’s new logo designed by Commission Studio in London. An emblem of sisterhood, it shows the silhouettes of two seated women facing each other and holding hands.

Also new this season were knit dresses and scarves produced in Cape Town. In one image, Annah Seroalo modeled a green-and-white ribbed version in the dining room of Magugu’s childhood home, suddenly transformed into a theater of high fashion.

The photographic project was personal and political for the designer, who noted that Ipopeng’s histories and people remain largely ignored — though that won’t stay the case for long.

Magugu was among the designers invited to the Élysée Palace on Monday night for a dinner hosted by French President Emmanuel Macron and First Lady Brigitte Macron to kick off Paris Fashion Week. “That was crazy,” the designer said. “He came up to me and we spoke for quite some time.”

Macron shared some of his government’s planned projects with South Africa.

“There are so many people back home on the continent and also in South Africa across so many disciplines who are incredible at what they do, but they don’t really have that visibility, so with him looking at the continent and lifting people up, I really think that’s a win-win situation,” Magugu said.