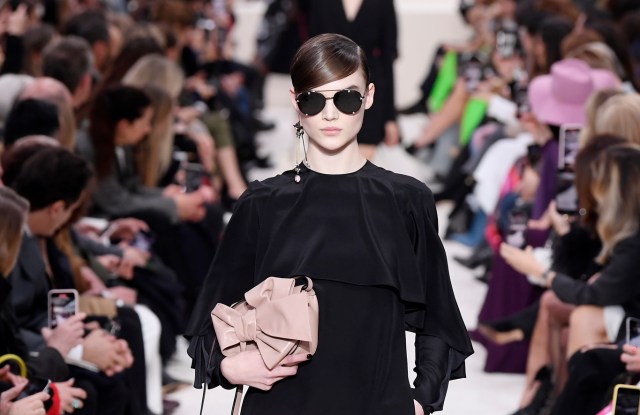 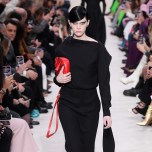 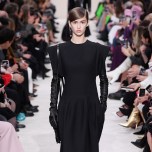 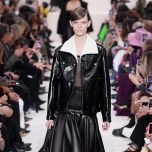 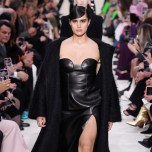 Pierpaolo Piccioli is an emotional designer who thinks deeply about the values he espouses on his Valentino runway. He’s been mulling inclusivity for some time, and for fall embraced it to a bold degree, casting men as well as women and using many of the same wardrobe concepts for both.

“It’s a really inclusive collection,” Piccioli said during a preview. “I don’t care about any categories or genders, about sizes about ages. I feel that we’re all humans. Wear what you want.”

That may sound like a prescription for anything goes, so it’s surprising that Piccioli started this freedom-of-dressing foray by studying uniform codes. “Strict and efficient,” the show notes read, “the dress disappears, while the face, the gestures and the manners are truly felt, bringing out the human being in all of his or her splendor.”

All of which sounds deep and heady, and there’s no reason to think Piccioli is anything other than genuine in seeking to create clothes without boundaries. He’s also a savvy pro who understands the need for brands to evolve, sometimes in a more commercial direction. Last fall’s collection featured lines of poetry and giant prints of embracing lovers. This one emphasizes not specific uniform tropes per se, but codes of uniform dressing, particularly classic men’s wear fabrics and leather, sometimes integrated with high-intensity sequins and bold, giant florals taken from his men’s collection.

Did we mention Piccioli made it all sexy? After an amazing run with the fabulous volumes that inspired designers the world over, in his last couture collection, Piccioli made a clear shift to a leaner, more obviously sensual silhouette, and he continued that direction here. Often, the move was overt, as in leather corsetry and a curvy strapless dress over a second-skin sequined turtleneck. But he hasn’t abandoned volume completely. It turned up in wonderfully slouchy trouser suits for women and men, worn with sheer Ts, and in ingeniously cut outerwear and dresses. As shown, a black coat with a skinny belt looked lean. Unbelted, two long pleats inset with a georgette open up, altering the silhouette. Ditto with several silk dresses. Piccioli showed them front-folded and belted, but they release into fluid A-shapes. The coats were impressive, from short and long peacoats to an indulgent men’s version covered in 3-D leather flowers. For evening, while Piccioli showed a number of lovely gowns, the freshest look was sportif: a cape-like top in blue sequins over trousers that will do double-time as a daytime staple.

Speaking of which, with this collection, Valentino is launching Valentino Garavani Atelier bags, a tony range sewn in the manner of bonded cashmere. He sent out numerous versions in various sizes, often embellished with unfussy flowers and bows. When you’ve got it, flaunt, especially when it’s a great new bag.