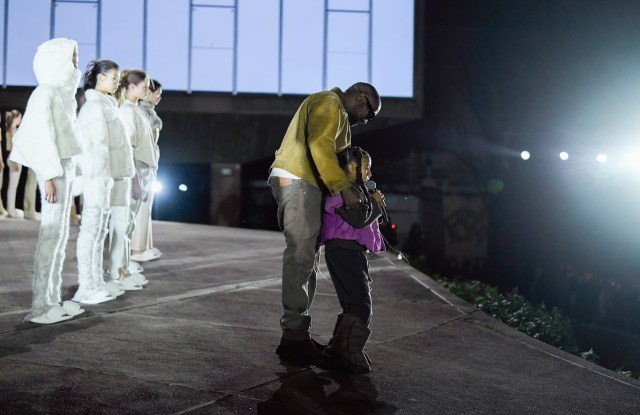 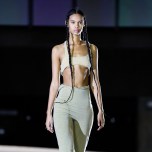 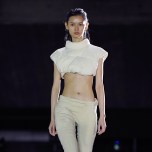 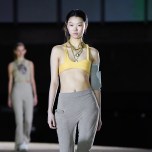 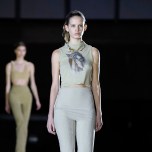 It was brilliant. Kanye West’s stealthy takeover of Paris Fashion Week was brilliant in its last-minute buzz factor. Brilliant in its two-part punch, a religious event that prepared the way for the second coming, a quasi-religious fashion event. Brilliant in playing the kid card. (North West’s rap performance, adorable or irritating, depending upon where you stand on the grump-o-meter.) Brilliant in West’s iron-cast, I’m-a-star knowledge that — no matter the time (9:30 p.m.) or prior negative Yeezy experiences (Roosevelt Island) — if he built it, we would come.

We did, though a few opted out of Part One, the Sunday Service at the Bouffes du Nord theater. That proved to be a glorious 90 minutes of positivity that was, remarkably, at least to the uninitiated in the one-time congregation, not about Kanye at all. The choir leader referenced “Mr. West” once, a good 30 minutes into the concert, after which he did a brief solo. But for the most part, West faded into the 120 incredibly gifted singers of his Sunday Service choir, who lifted their voices in praise of a different Almighty.

Soon after the Sunday Service was confirmed, rumors started swirling about a show — Yeezy Season 8! Then, yet another invitation: Reviewers could come for a preview 30 minutes before the called show time. We arrived to what felt like a secret entrance and were led down a darkish flight of external steps and into the Oscar Niemeyer-designed headquarters of France’s Communist Party. Inside, it was all bright lights, vast, modernist expanse of floor space and people milling about in that pre-show way, some with purpose, some seeking purpose, and publicists telling you that Kanye should be ready soon. “Soon” being a nonspecific term, waiters appeared with trays of Champagne and red wine.

Eventually, we headed into the structure’s spaceship-like domed enclosure. The building is West’s favorite in Paris, never mind all that chichi Haussmann nonsense. His models were positioned about the sphere, a sort of “Mad Max” pretty-girl brigade, because no matter the impending doom, no self-respecting female affiliate of the West family would face Armageddon looking anything other than perfectly turned out.

While preview guests had been pre-advised not to take pictures, everybody did while milling about before finally encircling West for his insights. They were deep, and delivered with a certain out-there charm. He acknowledged being “obsessed with hazmat, and that whole kind of a vibe.”

In West’s sartorial reading of this futuristic world, people will go back to basics with a cozy current. That means lots of beige and putty-hued tones and ample padding, with an emphasis on parkas, crop tops and leggings worn with padded moon boots or bedroom slippers. The fabric of choice: muslin, at least until he works out the various leatherized and sueded finishes he has in development. His other favorite material: swaths of thick, raw wool. As a jacket, OK, it made sense. Matching leggings looked itchy, but a model proclaimed them “soft.” Her ensemble was inspired by some residents of the Wests’ recently acquired 6,700-acre mountain ranch in Wyoming — its 700 sheep. Asked if the wool came from the ranch, West said, not yet, but in the future, it will. “This is very experimental…we’re just looking at different ways to approach things.”

He then digressed into a musing on “merch,” seeming to make a distinction between mere merch and genuine fashion (à la padded parkas and bra tops) with a further digression into his Hollywood Bowl operas. He said he swore off doing “merch” four months ago when he realized he’d fallen into a trap. “I wasn’t pushing myself enough, and we were doing a million dollars a night in merch.” (One assumed he referred to concession sales at the opera performances.) “I remember when I first started doing fashion…we fought to not do T-shirts. And then I looked up and I was only doing T-shirts. So we stopped and just started focusing on, you know, changing, making new shapes, new inventions each one of the pieces here — some of them are in the infant stage.”

It was unclear whether that infant stage is ready for retail, or if this was a test moment for Yeezy to be seen in the context of Paris Fashion Week. Either way, West wasn’t shy in predicting its impact. “You’ll see these shapes start to affect other designers,” he said. “It’s just important.” He also offered a novel take on the notion of mass fashion. “People talk about mass scale. But there’s 8 billion people on the planet. So what is mass, really?” he mused. “Whether this gets, you know, as big as The Gap was when I was younger, or it’s one, it’s closer to that one than it is to 8 billion.” Bet you never thought of it that way before, right?

After our audience with West, we went outside and assimilated into the not-just-fashion crowd that had gathered for the standing-only show, shoes sinking (and sinking) into the muddy turf. Never mind that the models were far distant; their images were projected giant-sized on the Niemeyer facade. Then North West did her thing (no confidence issues there), Dad gave her a hug, they bowed together, and everyone dispersed into the Paris night.

Kanye West Is Getting a Warm Welcome In Wyoming