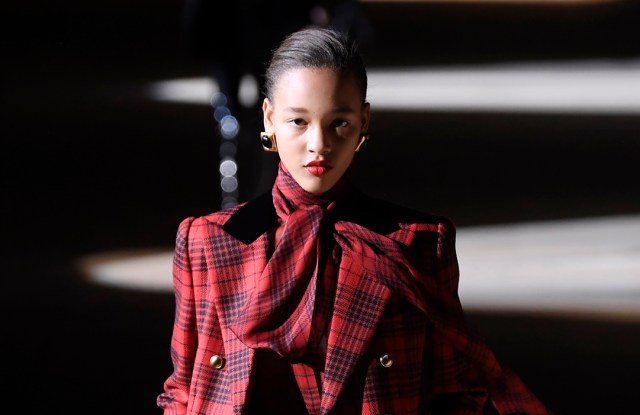 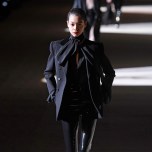 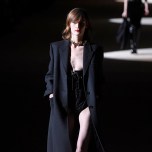 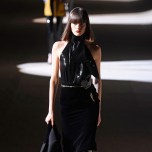 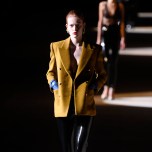 Le smoking was smoked, the jean shorts shorted and Marrakech a distant memory. This season, Anthony Vaccarello went all in on Latex to put his spin on fashion’s throwback bourgeois trend.

Latex leggings were the new base layer for the house specialty: jackets. In an antidote to so many seasons of black, double-breasted blazers came in an array of patterns and hues — royal blue, firecracker red, yellow, Prince of Wales check, windowpane and more, with perfectly prim velvet collars and gold buttons. The models rocked them, hands in pockets, legs gleaming, casting big shadows on the soft-carpeted infinity runway.

The reference for the collection was the Nineties, the designer said backstage, after greeting Rami Malek and Zoë Kravitz. “That was when YSL was less in the street than in the Sixties and Seventies.” Now, once again, fashion is getting more dressed up.

There were memorable moments, like a glossy black Latex halter dress cut out at the sides and tied in a bow at the nape of the neck, which brought to mind something Catwoman might wear on a date with Batman, and a barely there sheer black bustier over electric blue leggings that Sandy could have worn to dominate Danny at the end of “Grease.” But overall, this was a commercial enterprise somewhat lacking in real, palpable sex appeal and subversion. (Does skin-tight and nipple-revealing even count anymore?)

When asked backstage if the prevailing #MeToo movement has influenced his work, Vaccarello said, “My woman has the power of doing what she wants…she’s not submissive.” (In other words, she’s on top.)

But coming off Maria Grazia Chiuri’s latest feminist manifesto at Dior (flawed though it was), and the Harvey Weinstein guilty verdict, one couldn’t help but wonder what the great female liberator himself, Yves Saint Laurent, would have added to today’s gender fashion conversation. Perhaps something more revolutionary.