The designer is thinking much more commercially - and sustainably - than ever. 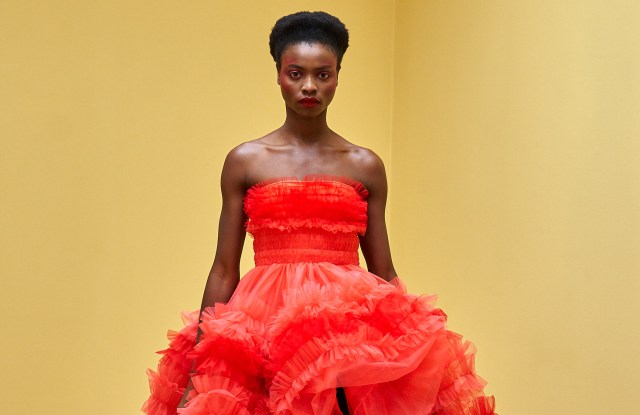 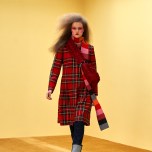 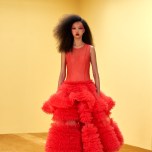 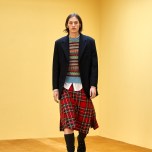 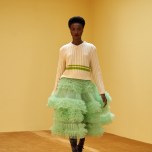 Molly Goddard reined it in, shifting her attention from the usual XXL volumes to a more pared-down, but still fun, collection. Goddard’s statement tulle dresses still bounced their way across the show space — a little, theatre-like stage — but their voluminous shapes were tamed by mannish tailored jackets, Fair Isle sweater vests or long striped scarves.

Coats with velvet collars and buttons, recalling posh school uniforms, were slim and elegant, as were Fifties taffeta party dresses with stiff bows placed randomly here and there. She even deflated her day dresses, which were still roomy, as in one pink plaid trapeze style, but not as extreme as in past seasons.

Goddard brought men’s back to the runway, too, dressing them in long tartan kilts or frilly trousers, tailored jackets and Fair Isle sweaters with bright stripes. She also ran wild with color, layering a reddish Fair Isle sweater vest over a minty tulle dress; winding a long striped scarf around the neck of a baby blue coat; or turning taffeta dresses tangerine.

It’s clear that Goddard is thinking much more commercially — and sustainably — than ever. Her knits and royal red tartans are made in Scotland and other parts of the U.K., while a lot of the production is done in London, often with her very own hands.

She brought men’s back to the runway because she said it’s been selling well, and over the past few months she’s also added a bridal, custom-made services, digital trunk shows and e-commerce. She said during a Zoom interview that “the last year has forced us to get to know our direct customer” — and that’s never a bad thing.