Veronica Etro felt the need to get out of her comfort zone and further distance herself from her bohemian aesthetic as she did for spring, exploring the concept of freedom and looking to two legendary figures: Rudolf Nureyev and Jimi Hendrix. 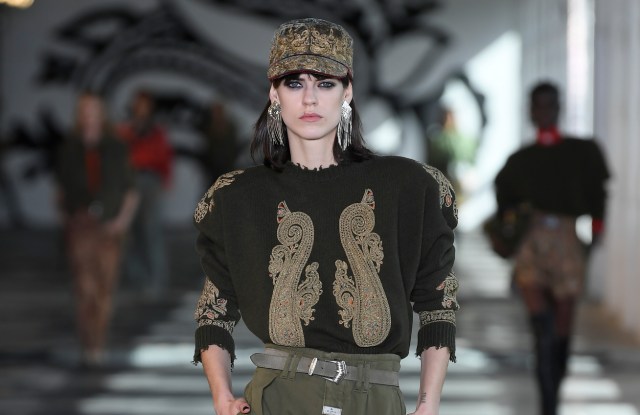 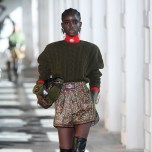 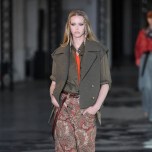 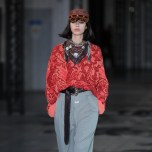 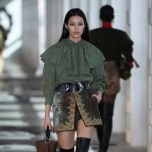 Veronica Etro felt the need to get out of her comfort zone and further distance herself from her bohemian aesthetic as she did for spring, but while lightness was a focus for that season, for fall the designer explored the concept of freedom.

Her inspiration was not a woman, she said, but two men, apparently with little in common, while they actually shared a free-spirited and rebellious attitude: Rudolf Nureyev and Jimi Hendrix — although Etro underscored she wasn’t interested in developing ’70s silhouettes. “And I don’t think of them as men, but rather, I take cues from their aesthetic and their lifestyle.”

“I grew up with the myth of Nureyev,” said Etro, explaining that her father Gimmo collected personal items that belonged to the legendary ballet dancer and choreographer. “He was super-modern and had a rock side,” she said of Nureyev. “I connected to his love for fabrics and travels, his culture, his homes decorated by Renzo Mongiardino.”

To be sure, the collection juxtaposed Russian ballet motifs with soft evening robes and fringed vests or blazers, associated with Hendrix’s image, as well as exotic prints of tigers and geometric intarsia.

There was more knitwear than in the past as well as leggings and T-shirts. “The pandemic has overturned all pre-existing rules, codes and functions and there are no more rules. Everything is possible and now we wear outfits we wouldn’t have in the past,” Etro explained.

These were not your average leggings, however, as Etro added her sophisticated touch with exquisite embroideries or pairing them with sleek coats and thigh-high boots — also embroidered — all reminiscent of Nureyev’s stage costumes.

Etro steered clear of costume-y looks, though, and delivered a younger, more daily wear collection, with loose and comfortable silhouettes. Soft high-waisted or quilted patchwork pants were worn under roomy sweaters or paisley jackets. There were brocade mannish suits and plenty of covetable outerwear, from quilted anoraks to nylon bombers and patchwork puffers or coats. Tie-dye treatments and Etro’s paisley motif appeared on corduroy pants, but the designer reined in the brand’s signature element, tempering it in the above mentioned patchworks, for example, or in the fresh shorts.

There were a number of feminine mini and long velvet dresses — always a staple for Etro — contrasting with chunky belts with embossed metal buckles, as well as blouses with Victorian collars and tops with inlaid bibs.

The designer experimented with washed denim looks and with a new black and white logo on the neck of high-collared sweaters or beanies.

To present the collection, the video displayed the models walking in an industrial space to the music of Arlissa, shown performing live on a rooftop terrace overlooking the Los Angeles skyline at night. Wearing a bikini-like top under a soft cardigan casually falling off her shoulders, both in a signature Etro pattern, over a pair of washed denim pants, Arlissa looked as cool as can be — in tune with the brand’s efforts to keep abreast of the trends and in tune with the times.