Kim Jones' rtw debut was a masterclass in investment dressing with its tawny colors, sumptuous fabrics and restrained flourishes. 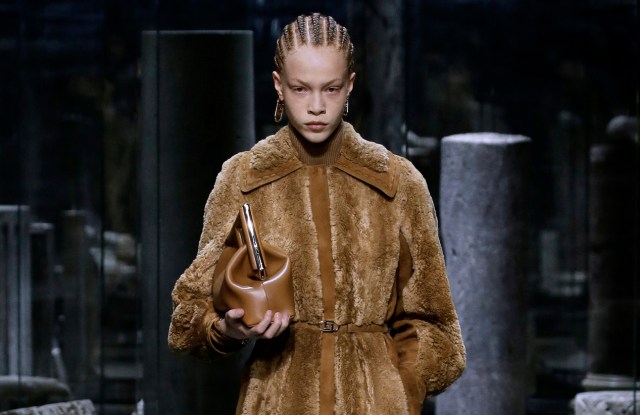 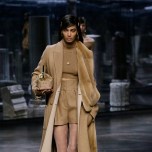 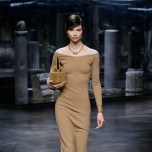 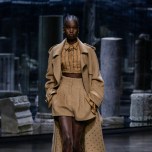 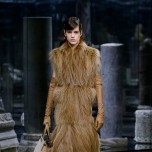 Kim Jones delivered exactly what he promised in his debut ready-to-wear collection for Fendi: a neutral-toned “palate cleanser” based on real clothes that are right for today.

He neglected to mention the chic of these ultra-refined garments: long tailored coats with feminine swagger, slyly sexy waist-hugging dresses and only the most luxurious of flourishes — long fur fringes and drifting panels of gleaming silk.

Luxury consumers spooked by the pandemic have been parking their money on big brands and sure bets, and this collection looked like a masterclass in investment dressing with its tawny colors, sumptuous fabrics and restrained flourishes — a bell-shaped sleeve here, a fluttering caped back there. It also opened the door to a younger clientele with its bounty of waist-baring sweaters, cropped shearlings, bra-like tops and short, body-con dresses.

During a preview, Jones said he looked mainly at the leather goods during his trawl through the archives, hunting for details and DNA he could apply to the clothes. These were difficult to detect on a small screen as models whisked through a maze of giant glass F’s, props from Fendi’s couture show last month jumbled here in a new configuration at the brand’s runway theater in Milan.

He also considered the needs and desires of the fashionable women in his inner circle, from Kate Moss and Ronnie Cooke Newhouse to longtime right hand Lucy Beeden, plus all the powerful women at Fendi, headlined by Silvia Venturini Fendi, whose go-to shirt jacket was zhuzhed up into a shearling version with a mink interior.

“The Fendi family are women of intellect who work hard — and that’s what I wanted to celebrate,” Jones said in the press notes, describing a “usefulness” to the collection despite its hyper-luxurious ingredients.

He didn’t shy away from using fur, as conflicted as he is about its use, and there were smatterings of exotic skins, too. But mostly he expressed luxury via expert cutting, the ultra-fine fabrics and the sophisticated, subdued colors.

Fendi is a baroque house, and Jones held himself back, offering reassurance and “luxurious self indulgence” instead of razzmatazz to get things started. Just imagine where he can go from here.