In an old-style runway show with paparazzi flashbulbs blazing, the designer pushed forth a more commercial, tailored, equestrian-tinged, '90s and early Aughts-reminiscent image for next season. 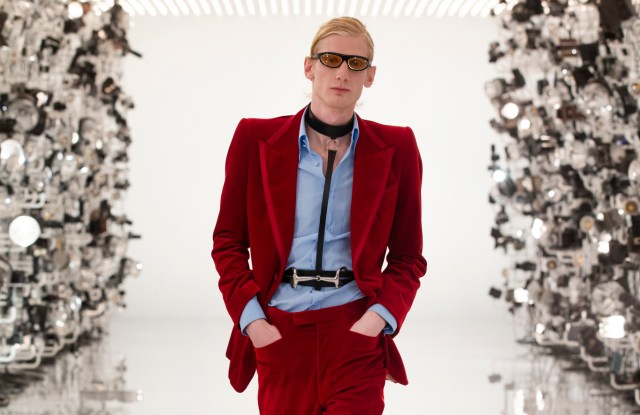 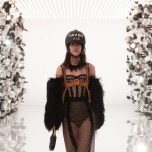 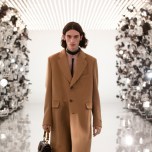 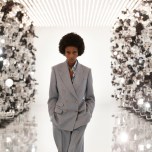 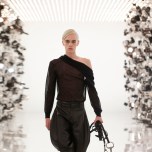 Gucci’s 100th birthday celebration is off with a bang.

Alessandro Michele debuted his new “Aria” collection Thursday morning via a 20-minute film that brought viewers to The Savoy in London, at least in spirit, where brand founder Guccio Gucci was once employed as a bellboy.

In an old-style runway show with paparazzi flashbulbs blazing, the designer pushed forth a cleaner, more tailored, equestrian-tinged, ’90s and early Aughts-reminiscent image for next season — with a little help from his friend, Balenciaga’s Demna Gvasalia.

Set to a bouncing soundtrack that surfed the brand’s hip-hop mentions, including Lil Pump’s “Gucci Gang,” Rick Ross’ “Green Gucci Suit” and Bhad Bhabie’s “Gucci Flip Flops,” as a piece of entertainment, “Aria” was a hit — tightly focused with a more straightforward story than the brand’s bloated, star-stuffed, seven-part “Ouverture” miniseries. And rather than a host of celebrities, Gucci was the star, fitting for the anniversary year.

“I focused on the brand’s DNA because it’s part of mine,” Michele said of the film, which he made with director Floria Sigismondi. He wrote the script, ruminating on the power of Gucci in pop culture, and likening its mystique to a club, only one that under his direction, everyone is invited to.

The collection spanned generations and influences, touching on the brand’s heritage with a jockey’s colorblocking, “Savoy Club” riding helmets and turning the house horse bit into fabulous fetishy harnesses.

The mix of pared-back bourgeois classics — riding jackets and trouser skirts, jodphurs, boots and belt bags with bamboo embellishment — was newsy and more commercial for the maximalist brand, and reasserted Gucci as a purveyor of timeless wardrobe workhorses.

Although the house never made saddles like Hermès, “the equestrian world is part of the myth of an elite world,” explained Michele of how he looked at the making of the Gucci legend. “The history some French brands have is a fascinating burden, but I have a lab,” he explained.

He picked up Tom Ford’s seduction story from the ’90s and early Aughts, including power puff, feather sleeves; lingerie lace, and low-slung logo jeans fastened with a horse bit belt that looked covetable again worn with logo slingback pumps — and a red velvet suit that was a ringer for the one Gwyneth Paltrow wore to the 1996 MTV Music Awards. Instant collector’s item!

So, too, will be the shiny Gucci-meets-Balenciaga suiting and outerwear, defined by the brand as “an homage,” but undoubtedly keying into fashion’s current collaboration fever. Michele’s admiration of Gvasalia’s assertive tailoring was on full display in the linebacker-size shoulders on several pieces, including one allover electric blue and black GG sequin coat that would seem destined for a performance stage any moment.

“I told him I wanted to play with styles belonging to another house,” Michele said of his initial call with Gvasalia, whom he referred to as a friend, explaining that he used the designer’s patterns and styles. Balenciaga’s padded hourglass silhouette turned up in GG logo blazers, worn with slit skirts and second-skin boots, for example.

Suiting was a throughline and it looked good, in candy colors, with double-breasted blazers over slightly flared trousers for men and women, or covered in allover kaleidoscopic GG logos in more loose shapes, and there were sportswear touches in the form of puffers and parkas.

Although there were lots of extras, including bags printed with Gucci song lyrics, branded nose rings, body chains and even fine jewelry, Michele’s maximalist magpie styling took somewhat of a backseat in favor of a more uncluttered look. It felt fresh for it. But inclusivity — his singular contribution to the brand and to fashion — was the beating heart of the project (check the crystal-covered runway minaudières, too).

Michele supervised the music, and conceived of the concept, keying into this moment of collective creativity, and taking cues from the hacking/bootlegging culture Gucci has embraced, rather than shunned, through its collaborations with GucciGhost, Dapper Dan and others.

And although there weren’t any celebrities in the house, he paid homage to Hollywood’s role in the making of the Gucci myth with the cinematic style of the film, and the old school paparazzi flashbulbs. Those seemed to nod to how Gucci first rose to the pop culture consciousness through street style images by photographer Ron Galella of Jacqueline Kennedy Onassis and others in the ’70s, and continues to captivate today through images of Lady Gaga and Adam Driver filming the upcoming “The House of Gucci” in Rome.

With an eye toward the roaring 2020s, there were plenty of party clothes, including a gorgeous sheer blush lace and feather gown revealing a bra and thong underneath that seemed a tribute to Marilyn Monroe’s “Happy Birthday Mr. President” dress from 1962, itself a collaboration between then upstart Bob Mackie and his boss, costume designer Jean Louis. A cream-colored cape tinged in red feathers was another drama piece.

“I love costume directors who create different personalities,” Michele said, noting how their storytelling ability has influenced his creative process.

At the end of the film, the models burst forth into an outdoor paradise, a post-COVID-19 garden of Eden, spritzing perfume, putting on lipstick and embracing old friends. It was a poignant moment from the brand born in Italy, a place that has suffered and continues to suffer so much during the pandemic. As Michele said, “This is a hymn to life.”