The seasonless collection had a darkish, nocturnal vibe. 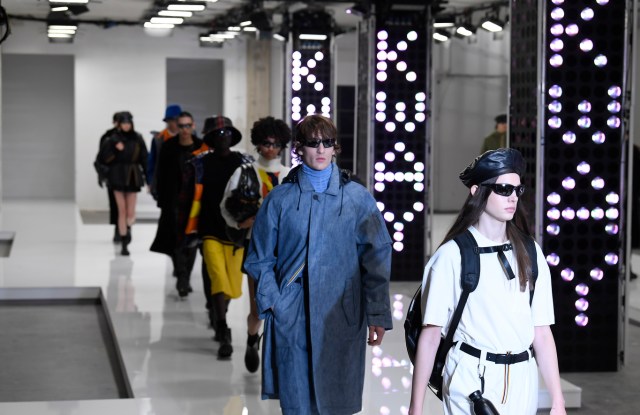 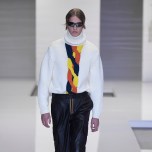 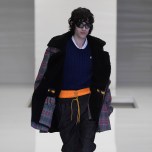 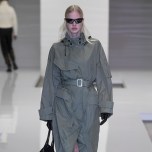 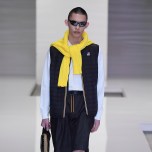 For its second show, K-Way sent out a bottle of Veuve Clicquot wrapped in a branded thermo-proof nylon case.

To be sure, the brand has at least one reason to celebrate as its owner BasicNet is set to unveil its Milan’s headquarters. The show was livestreamed from the 43,000-square-foot space — pandemic be damned.

The industrial venue with its spare ambience was lit up as if night owls were caught at sunrise on their way home from some underground club.

Navy stretch velvets boasting water-repellent features, as well as Harris Tweed checks, were worked for floor-length overcoats cut in loose shapes, as in a collarless unisex cape that swung as models marched to the electro soundtrack.

Elsewhere, functionality took center stage as in striped puffers that could be worn inside out to reveal their Scottish flannel lining, or oversize field jackets with side zippers.

Brightening up the dark collection, the design team helmed by Monica Gamberoni added some colorful pieces referencing K-Way’s signature yellow, orange and blue tape. Those nuances appeared as a cable-knit detail on the front of ivory turtlenecks, on padded trapper hats and in crewnecks styled around the shoulders.

“We’ve decided to host an annual show, without being in the loop of seasonal presentations. It’s more about showing each year where we’re headed in terms of style,” Lorenzo Boglione, K-Way’s vice president of sales, said during a preview.

With a punchier look than one would expect from a brand known for its sporty outerwear, K-Way is on the right track to improve its fashion quotient.