Lorenzo Serafini continues to evolve his vision for the Philosophy brand exploring new territory, and for fall he looked to an imaginary school for inspiration. 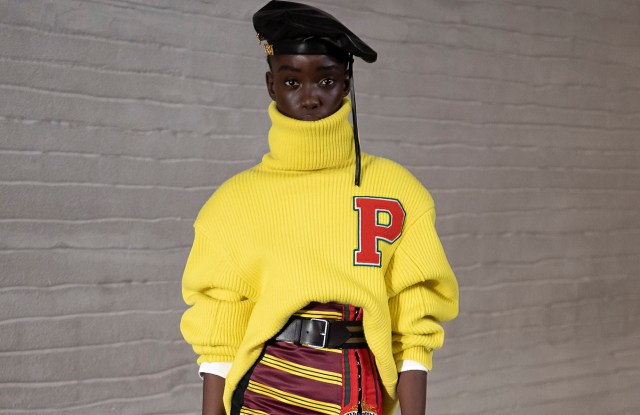 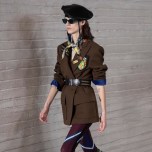 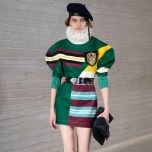 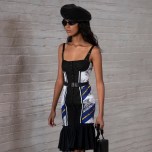 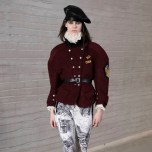 Lorenzo Serafini put to good use his observations of the pandemic, in particular the impact the health emergency is having on schools and students, who are forced to digitally interact and be socially distanced. His fall collection pays tribute to an imaginary school, as the designer blended his own memories with those of a Victorian college, or the idea of a British or American institution.

The look: Students at Serafini’s school aren’t afraid to show some leg, as skirts were mainly offered in a mini version. There were more demure looks, too — colorful striped and printed leggings or midi, pleated and patchwork skirts and kilts, embroidered sweatshirts with Victorian collars, and roomy turtleneck sweaters. The designer revisited varsity sweaters, embroidering the brand’s initials, which he said conveniently match with Princeton’s, or a coat of arms inspired by an archival document.

Quote of note: “I was thinking of the importance school has on growing up, getting an education and its formative years, how it shapes us and how kids have been deprived of this experience and of staying together for months because of the lockdowns.”

Standout pieces: Jackets had a mannish cut, and the silhouettes and fits were versatile, with several looks easily belonging to a man’s wardrobe. In fact, Serafini cast two male models for the video to present the collection. Asked if he was thinking of venturing into men’s wear, the designer was noncommittal. “Let’s see how this goes, but in the meantime this is something I would like to wear,” he said with a light shrug and a smile, pointing to a varsity cardigan. One was all hand-embroidered with a sketch of a cat and some writing, reminiscent of “what you could see scribbled on a desk by a kid,” he said.

Takeaway: Serafini has gradually been presenting more and more daywear looks and in this collection even more so, and he developed pretty dresses that reflected parent company Aeffe’s production expertise with prints and corsetry constructions. For sure, you’d be one of the cool kids in school with any of these looks.