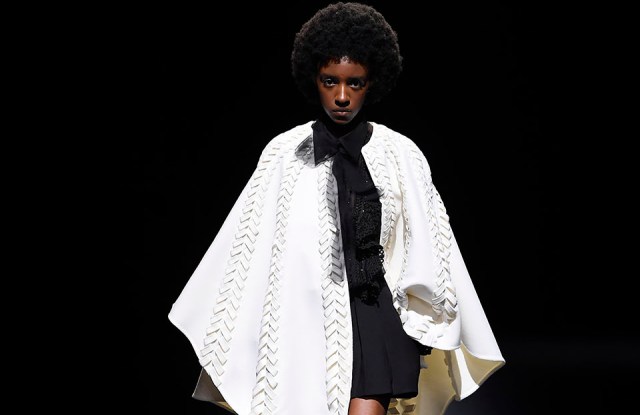 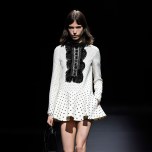 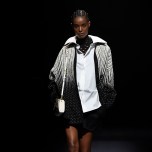 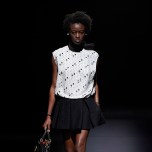 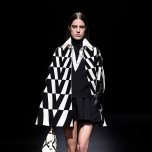 Pierpaolo Piccioli opened his Valentino collection notes with a quote from Lucio Fontana, the Italian artist who founded Spatialism and famously slashed and stabbed canvases. The reference was appropriate, since the designer presented a completely new silhouette — super short dresses and skirts — dramatically cutting and changing the proportions of his signature floor-length and fluid designs. Men’s pants were also cropped to above the ankles. Piccioli had experimented with shorter looks for spring, but he admitted this was a key concept for fall.

The designer met a small group of journalists — all duly tested and socially distanced — after the show, which was livestreamed from the Piccolo Teatro di Milano on Monday, the day Milan and the Lombardy region returned to more severe restrictions, entering the so-called orange zone — just a step below the red zone — given a pickup in coronavirus infections. The poignant mood was heightened through a live performance by Cosima and Milan’s Symphonic Orchestra Giuseppe Verdi, crooning Sinéad O’Connor’s “Nothing Compares 2U.”

But the designer wanted to convey a message of freedom and hope, saying that opening up a theater after so many months of lockdown was “a bold, almost punk sign,” being able to “share the emotions of a show when the communal activities are denied.” He underscored that the Piccolo is “a symbol of progressive culture and it embodies all the values our brand stands for, it’s a place of inclusivity and freedom.”

Piccoli said he wanted to be assertive, offering a clear message. And so he did, as the coed collection hinged on precise elements and a mainly black and white palette, with the exception of a few gold looks. It was an ode to Valentino’s craftsmanship and artisans, as the embroideries and intarsia were exquisite and incredibly detailed, almost couture-like. Piccioli never distances himself from what he calls “the spirit of couture as culture, but for daily use and without any nostalgia of the past.”

What looked like a mesh turtleneck was actually made of twisted strips of fabrics placed on tulle, forming a diamond pattern, and worn in layers under a shirt, a pullover and a coat. The archival macro V logo or the macro check grid glittered with intarsia, which added texture, while a lace Victorian bib-like decoration embellished a polka dot dress. The outerwear was outstanding, as Piccioli revisited peacoats and jackets as capes — another reminder of couture.

For evening, length returned on flowing gowns. A standout was a black chiffon gown in single panels held together by ribbons. Romantic? Perhaps, but Piccioli, explained that romanticism in his vocabulary does not stand for “prettiness but Sturm und Drang, it’s the choice to be an individual, not a group, it’s punk anarchy and subjective. This is a more personal romanticism, more intimate, there’s eroticism but this is not a sexy woman or a macho man, there are no stereotypes, only people seen in a personal way, without any clichés.”

The accessories also did not disappoint. In addition to new nude, stiletto heeled pumps with studded toes, the designer showed boots with engraved rubber petals, which tempered their sturdiness.

Piccioli waved away references to Valentino Garavani’s 1989 couture collection inspired by Vienna architect Joseph Hoffman, also marked by decorative black and white motifs. “I don’t look at the past or the archives, to review them would be to imitate, and after 20 years at Valentino, I believe I have absorbed the brand’s codes and re-elaborated them in a different way, they are part of me. It would be difficult to separate my identity from that of Valentino’s,” he said. “The connection with the past is part of an aesthetic identity.”

Indeed, the collection looked fresh and should cater to the younger generation the brand has been courting. Piccioli’s decision to work with the actress, singer and activist Zendaya to front the spring ads is in line with his goal to make the label more in sync with the times and more inclusive, while maintaining its storied codes.

Even as the show notes quoted Fontana, Piccioli said there wasn’t a specific theme to the collection. In fact, the designer dislikes storytelling in fashion, believing in some cases it has become sort of a trick. “The narrative is the collection itself, through my job I can do politics, bring values and emotions, a language, and being here is an act.”