Shapes both familiar and new rendered in a cool, gritty but subdued moody elan. 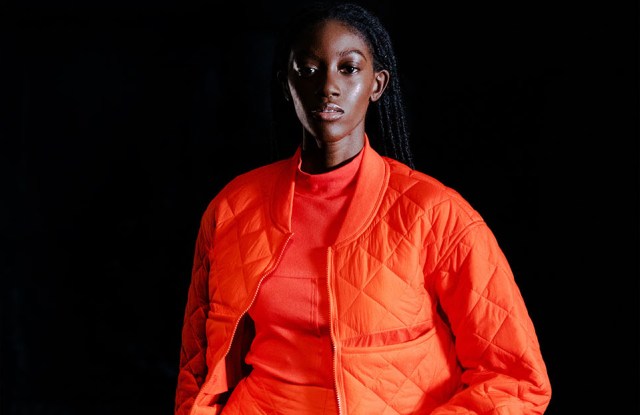 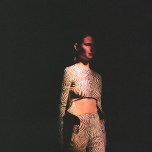 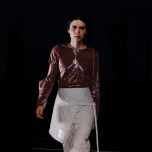 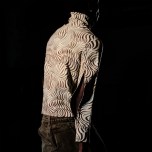 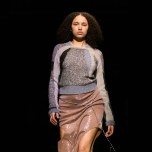 “There’s a more kind of somber, not necessarily melancholic, but a darker energy around this collection that still feels from [last] fall into today, pretty on point,” Mike Eckhaus said over Zoom. While he and Zoe Latta were approaching their fall collection (made up of both pre-fall and fall), they were both experiencing tumultuous times at a personal level (while the world was simultaneously). Their starting off-point for the season intrinsically followed, making their fall collection more subdued and moodier than recent ones in terms of palette and feel.

The duo leaned heavily into textile development (wonderful across knits, as usual, but also in cut-and-sew fashions), their signature interaction of the negative space exposed through splashes of skin against fabric (through snap-apart, button-apart details), and most intriguing, the concept of deconstruction on signature shapes.

“Breaking down core languages that are Eckhaus’ bread and butter,” Eckhaus commented, referring to the pieces as “building blocks.”

The look: Shapes both familiar and new rendered in a cool, gritty but subdued moody elan, juxtaposed with rich textures and deconstructed elements.

Quote of note: “Instead of reinventing our wheel — we just weren’t in the mood to do that — we worked with shapes that have been successful for us and are exciting, reinterpreting them in a way that’s dégrading them instead of cutting them in a new fabric,” Latta revealed.

Key pieces: Deconstructed and reimagined signatures — El Jeans and Lapped Tees “slashed to s–t,” or knit skirts knotted and tied at the waist; a mushroom-brown, clear sequin emblazoned jersey top and skirt with cutout details and chain belt; quilted “sleeping” skirts and trousers zipped high up the leg; knit tops and dresses throughout (ribbed, patchworked, screen-printed and in trippy patterns).

The takeaway: Much like spring’s runway-format film, Eckhaus and Latta shied away from opulence, embracing a more personal, authentic feel, but with a much grittier spirit for fall.

“We didn’t want to create something that was a fake experience, we wanted to create a show or happening that when you look at the images, it feels like you’re there in some sort of digital other-world, like fiction,” Latta expressed.

Shot against a black backdrop by three different photographers, the runway film gives an up-close and personal look at the collection’s divine depth in textile developments and materiality.