"We're a small company at GH and I don't have a CEO, so I have to do a lot of administrative things not related to design, to then design," said Gabriela Hearst. "In Chloe, it's all creative, so I just design all day like a kid in a candy store." 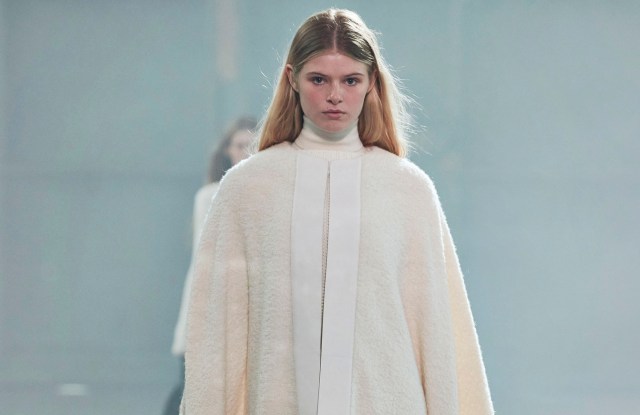 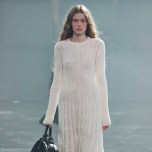 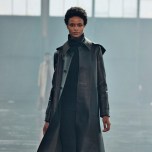 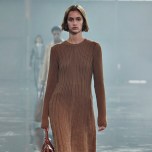 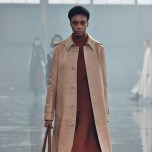 Gabriela Hearst has a clutch season, between her own fall collection unveiled virtually in New York on Thursday and her debut at Chloé March 3 at Paris Fashion Week. So it’s no wonder the sustainable luxury designer called on some divine feminine inspiration, specifically Hildegard of Bingen, the 11th-century German writer, composer and saint who believed in green power way back in the Middle Ages and translated her mystical visions into incredible drawings to rival those of latter-day Renaissance man Leonardo da Vinci.

And really, right about now, who couldn’t use some wisdom from a “genius nun,” as Hearst called the muse for her namesake fall collection, presented in a short film shot at a spiritual-looking, cathedral-ceilinged former fish market in Brooklyn.

So far, so good, Hearst said over Zoom of her new career balancing act, which has made her one of the few female designers in history to have her own brand and be the creative director of another.

Is she sleeping? “I have an app for that. My husband got me this ring called Oura — it’s very ugly looking so it’s a big sacrifice for me — but it measures your sleep patterns.” (She’s coming off a good night — nine hours.)

“We’re a small company at GH and I don’t have a [chief executive officer], so I have to do a lot of administrative things not related to design, to then design. In Chloé, it’s all creative, so I just design all day like a kid in a candy store. Usually, new designers have nine months or a year to prepare; I had two months. But we have a lot of smart people there, so it’s possible.”

Hearst called on more divine feminine inspiration to draw the lines between her own label and Chloé. “I had to do a presentation to get the job, and I simplified it by saying GH is Athena and Chloé is Aphrodite,” she said, adding that her team rather sweetly made her a chart to keep track of her two mythological fashion archetypes.

“Athena was a warrior, a leader, the goddess of craft and weaving. At GH, the skirt length is never above the knee, she will never wear a tracksuit on an airplane, her color is rose gold and blue sapphire.…Aphrodite is more about seduction and softness. Her symbol is the scallop, and scalloped edges are something that’s very Chloé. There’s a lot of symbolism there and it was important for me. When an idea comes, I already know if it’s GH or Chloé. It’s like Spanish and French, there’s a common root but there are differences. Let’s put it this way: creatively speaking, I’m very satisfied.”

Besides being taken with the genius nun’s mystical “Egg of the Universe” and “Courage of the Angels” drawings, which appear on the designer’s first collection T-shirts (not shown on the runway), and Hildegard’s presumed comfort footwear, which inspired the season’s take on quirky German health sandals, it was the saint’s steadfast optimism that captivated Hearst. In an even more challenging time, nearly a millennium ago, Hildegard founded her own monasteries, fought for church reform and was a pioneer in music, the arts and science.

“I’ve been thinking about this new renaissance,” said Hearst, who kept the monastic references to a minimum in her clothes, aside from a lofty cream bouclé cape opener. “I can feel new springs of goodness coming up in New York, where it used to be the only things that were opening were CVS stores and banks. It was losing its cool. All the artists were moving to California.…Now, there’s going to be more space for youth to start evolving.”

Speaking of evolution, it was refreshing to see Hearst use plus-size model and activist Paloma Elsesser on her runway, which should go a long way toward making her brand more welcoming for all. Many of the silhouettes felt more inclusive, too — cotton trenchcoats with fuller sleeves and shoulder-tie details; soft ribbed merino knit henley sweater dresses; sturdy cashmere shirt jackets and wide-leg pants, and stretch crochet lace and leather dresses were among the more forgiving shapes.

By now, Hearst has developed several signature techniques and materials, which she worked again this season, while tapping an expanded community of artisans. Once again she worked with craftspeople from her native South America, including Manos del Uruguay, makers of her statement ponchos and cardigans, which this season came in sweet patchworks and 3D florals reminiscent of the designer’s embroidered inauguration look for First Lady Jill Biden.

She also tapped resources closer to home for made in New York enamel belt buckles, and in her actual home, translating 12-year-old daughter Mia’s flower drawings into cheery prints, and designs for the collection lace and macramé.

Recycled materials — on track to be 50 percent of the brand’s production in 2021 — were paramount, including recycled cashmere, deadstock silk and bouclé. “This is the biggest obstacle, how do we show how this feels?” Hearst said of the limitations of the digital runway. “To me, the touch is as important as the sight.”

Gabriela Hearst: What to Know About Chloe’s New Creative Director