“The idea is also for people to see some range from me. A lot of people immediately think of red carpet when they see me,” Jason Wu said. 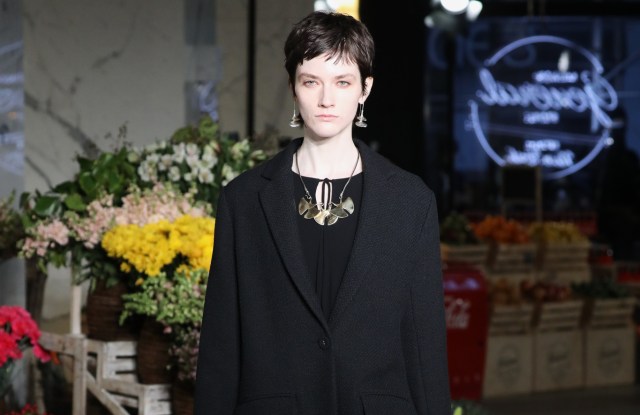 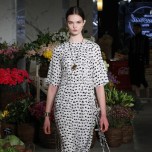 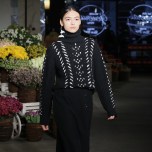 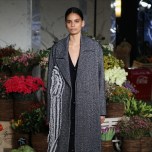 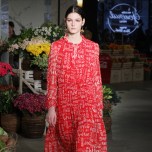 Through a partnership with Chefs’ Warehouse, Wu was able to bring his concept to life, while giving back to the community. Crates of fresh produce and baskets of colorful blooms wove through the space, creating a nostalgic Dean & DeLuca aisle-like runway for models to stride through; wine bottle stocked shelves and socially distanced showgoers (only 20 or so masked attendees) lined the opposing walls of the “store.” All of the food — ranging from fresh fruits and vegetables to breads, cheeses, packaged goods and more — was provided by Chefs’ Warehouse, the leading distributor of specialty food for chefs. Immediately post-show, everything in the store was being donated to City Harvest to help New Yorkers in need and feed more than 200 families across the five boroughs.

Leading up to the intimate show, Wu wanted to display fall as a representation of not only who he is as a designer, but also as a person. Over the past year, he took to cooking as a creative expression and reprieve from the difficult times; he cooked hundreds of dishes — including his mother’s recipes, created MrWuEats’ Instagram and spent time in Connecticut with his girlfriends.

“We’ve all become so jaded in fashion,” he expressed post-show. “’Another show, another show, another show,’ and from last season to this season, what it’s taught me is it’s really about my personal experience as a designer and it’s also about what feels good to me. We’re not only fashion…it should be as much about clothes as how we collectively feel as people. I think everyone wants to be in a store like this right now.”

The designer was also feeling nostalgic for his boarding school days in New England, growing up against the idyllic Americana backdrop. Eager to combine his two passions, Wu designed fall around elevated American sportswear and beautiful craftsmanship; a minimalist tone ran throughout, with playful pops brought forth by pieces designed with Coca-Cola’s archives.

“The idea is also for people to see some range from me. A lot of people immediately think of red carpet when they see me,” Wu explained, “From last season, vacation vibe, to this cozy sweater weather, I want people to see me as a versatile designer, that I can do it all, hopefully,”

The collection indeed showed range, embodying clothes women can realistically see themselves in — whether walking through the market or spending time at home. Outerwear was a prominent focus: fluid topcoats decorated with fringe (both long and short) and contrast topstitching details, elongated puffers and quilted jackets. Elevated American sportswear worked best through the lens of elegant minimalism: cozy knits paired with full-length skirts; fringed trenchcoats atop printed dresses and turtlenecks; easy frocks and a single white shirt with macramé overlay. Through a mix of classic plaids, a play on prints and artisanal details on unfussy silhouettes, accessorized with colorful leather Dear Frances boots and chunky gold baubles in collaboration with Ariana Boussard-Reifel, the collection embodied casual sophistication.

The designer was also attracted to the idea of working with an iconic American brand; Coca-Cola gave him complete access to its archives, which Wu intertwined into fall in a playful, polished manner. He infused Warhol-inspired repetition with retro glass bottles on pussy-bow blouses and pleated skirts — standout in the beverage’s iconic red, paired with a nubby cable knit sweater — and played with international logos, as seen on an airy printed dress. Post show, Wu emerged in a Coca-Cola hoodie, with the logo embroidered in Chinese; he will debut an exclusive collaboration piece with NYFW: The Shows as part of The Drops this week.

“It’s the first time I’ve been able to mix my two passions — food and fashion — together in a way that doesn’t feel forced, it’s just these chic shoppers coming in,” Wu expressed. Ah, the refreshing semblance of normalcy.