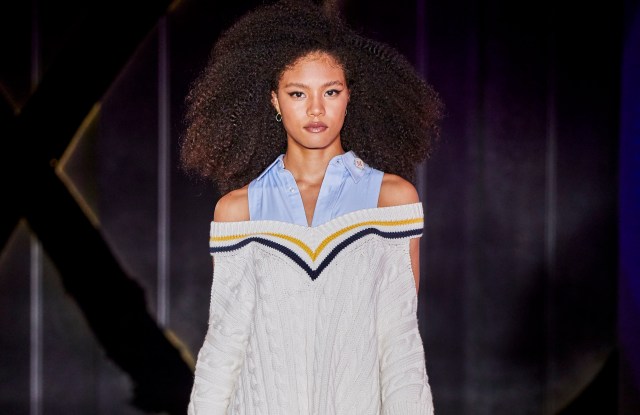 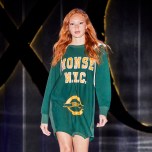 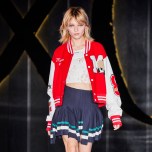 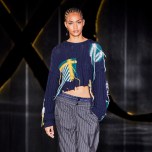 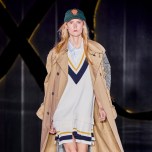 “I’m very used to cutting up my high school uniform,” joked Monse’s cofounder Laura Kim. “I used to get in so much trouble.”

For those who had to wear uniforms in high school, the trick, as Kim indicated, was how to take something everyone is wearing and make it one’s own.

Kim and Monse cofounder Fernando Garcia zeroed in on this idea with their fall collection, which started with images from HBO Max’s reboot of “Gossip Girl.” The duo saw early paparazzi images of the show’s cast outside the Met museum, using actress Jordan Alexander’s character as their primary muse.

The marriage of the two worlds — Monse and “Gossip Girl” — isn’t that much of a stretch; from the beginning, the duo, who also helm Oscar de la Renta, have taken to evolving American classics like plaids, trenchcoats and striped shirting, so deconstructing them through the lens of a high school uniform is a logical next step.

The result was a modern subversive take on back-to-school dressing, like an inside out crest sweater dress for a girl or oversize red and black plaid kilt for their guy. The 21-look, genderless collection smartly proposed new silhouettes, each pieced together using American preppy staples.

An oversize laceup blue denim jacket, a  navy prep school cape blazer with colored piping, a deconstructed beige trenchcoat with both denim and plaid panels — each was a unique take on the theme. They offered sporty pieces, too, such as a black biker short and sports bra top with bands using a Monse logo, which they paired with a tough moto jacket. There were several versions of the varsity jacket, a standout being the black style with white letters and oversize silver sleeves.

Garcia and Kim designed the collection and then took a chance in reaching out to the new “Gossip Girl” costume department, helmed by the original show’s costume designer, Eric Daman.

“We sent a few things, hoping they might work,“ explained Garcia. Work they did, with a look getting placement on Alexander.

It didn’t end there, though, as the powers who be at HBO Max stepped in and used Monse‘s fall 2021 collection as an anchor for the show’s New York premiere, with Daman styling the show. The party and event streamed on HBO Max’s YouTube channel, as well as on the “Gossip Girl” TikTok, Facebook and website. Guests at the event not only saw a runway show, but got a taste of the reboot, viewing the pilot episode as Champagne was passed around.

Judging from the crowd’s excited reaction, the reboot is poised once again to drive the pop culture conversation.