Creative director Louise Trotter offered up a reimagined assortment of pieces inspired by the archives.

IsSixWeeksAfterFashionWeek = false
By Jean E. Palmieri on May 12, 2021 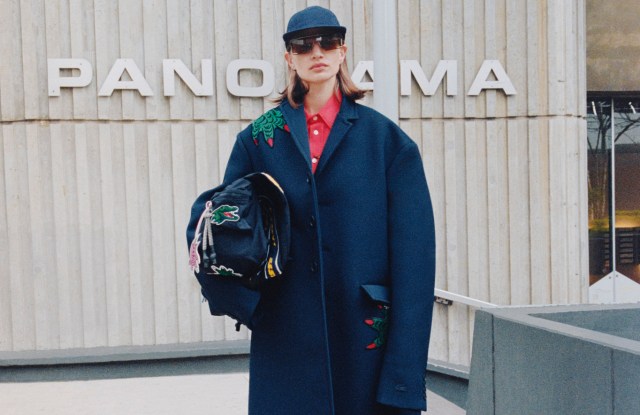 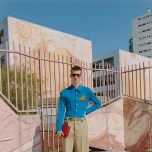 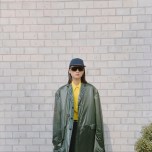 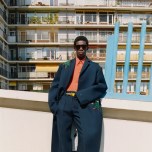 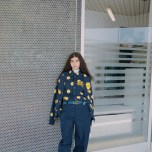 Lacoste creative director Louise Trotter continued her well-practiced balancing act for fall, taking inspiration from the brand’s rich archives and updating the looks so they remain relevant to a modern customer.

“I play with the history and heritage of the brand and bring it to an expression of today,” she said. “The starting point was how we wear clothes today. We all live a very active lifestyle and there’s a blur between home, work and play. We wanted to try and reflect that in the collection by offering a lot of ease and elegance, but joy as well.”

Traditional proportions were reworked with oversize sweatshirts and trenchcoats, shrunken track jackets and skinny track pants. Trotter also took the brand’s signature crocodile logo and reimagined it into cartoon-like claws and heads that she emblazoned on jackets, coats and sweatpants. There were flaming tennis balls and an oversize L-shape varsity logo that she used as an allover print on a sweatshirt. “I believe the crocodile is a super croc and larger than life,” she said. “I wanted to bring a sense of humor. That’s a rallying cry for so many people.”

She took the pique fabric from the brand’s polo shirts and used it in “unexpected ways,” including trenchcoats, tracksuits and sartorial fitted shirts. “We like the twist,” she said.

One standout piece was a patchwork puffer that Trotter created from vintage and deadstock Lacoste fabrics, textiles that she also used for tracksuits and dresses.

Overall, Trotter said she set out to offer up a “very playful take on French Ivy League and preppy” looks and “reimagine them in new proportions and colors.” Many of the looks were also genderless.

With lockdowns just now easing in Europe, Trotter nonetheless opted to show the fall collection digitally, and off calendar. “We’re not necessarily following a specific timeframe,” she said, adding that the shows will remain virtual “until it feels right for us as a brand.”