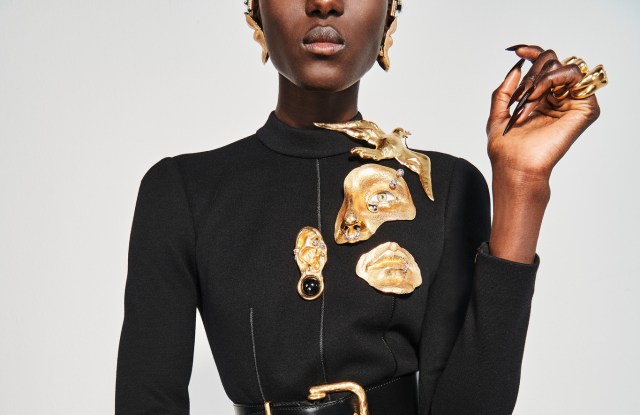 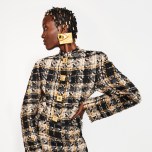 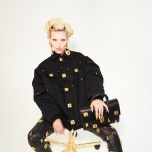 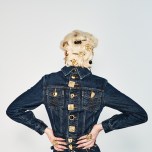 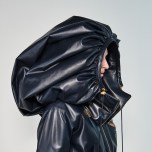 After a stellar couture season that included dressing Lady Gaga on Inauguration Day, creative director Daniel Roseberry wanted to keep the ball rolling with his fall ready-to-wear collection for Schiaparelli.

He doubled down on house codes like Surrealism, jeweled buttons and anatomical details, but translated some of the more conceptual elements of his couture line into wearable clothes.

A case in point: the quilted gold leather breasts that appeared on everything from a tweed jacket to a cream cable knit sweater. No doubt more comfortable than the molded resin bustier that inspired them, they nonetheless require a hefty dose of attitude.

After two years at the house, Roseberry is more confident about pushing the envelope with his rtw, expanding into casual items like jeans and parkas, though always with an upscale flourish. His Texan tuxedo featured jeweled buttons running down the back, while a black leather bomber jacket came with a dramatic detachable hood.

The designer kept the color palette minimal, allowing the wearer to dial up or down the hardware: chunky chains with pendants molded on real mouths and noses; padlock clasps on jackets and capes; knuckleduster rings shaped like molars, and what may be the world’s most far-out phone case: a giant gilded ear.

Having said that, he did adapt some elements of Gaga’s show-stopping outfit for this collection, namely her oversize dove brooch. Smaller versions should be available soon, and the bird appeared as a hand-painted motif on a white cotton poplin shirt.

“I feel like this is fashion for people who love fashion,” Roseberry said. “People are looking for something that’s not just another luxury-machine collection, and I think that there’s an intimacy and a joyfulness often about these collections that feel really right.”

How fitting that the collection should be unveiled on International Women’s Day, for these are creations for bold, unapologetic women who are not afraid to own the room — just like Elsa Schiaparelli herself.