The Japanese designer employed a range of conflicting concepts to turn out a collection that was cohesive yet somewhat repetitive. 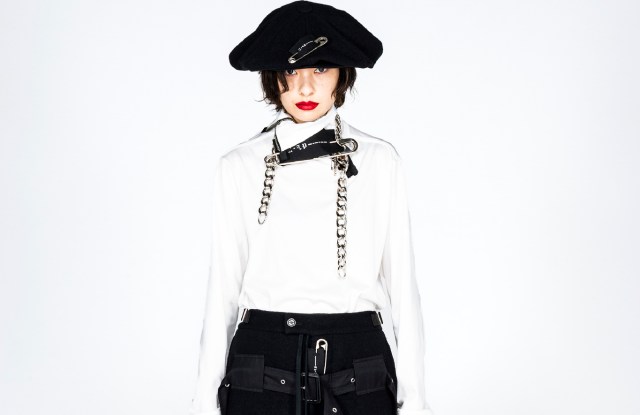 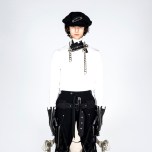 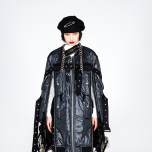 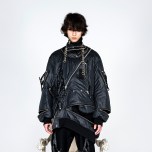 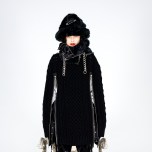 Takahiro Miyashita’s fall collection, as well as the video he made to present it, was full of conflicting concepts. There was the dark moodiness, the scenes of destruction, the almost medieval influences. And then there were flowers and — somewhat inexplicably — a model who appeared to be dressed as an astronaut. For what it’s worth, even the designer himself didn’t seem entirely clear on what he was trying to convey through his latest offering.

The look: The offering, turned out in all black and white, was heavy on hard-edged embellishments including silver zippers and eyelets, heavy chains, giant safety pins, long belted straps and cage-like fabric netting.

Quote of note: “I am still questioning the meaning of ‘RE:,’” Miyashita said in a recent interview, referencing his cryptic name for the collection. “It is thesis and antithesis at the same time. It is about freedom and restraint at the same time. It is unanswerable and questionable. It is an update to the both past and now and that attitude is reflected in the collection. It is the beginning and the end, and I somehow come and go in between.”

Standout pieces: Chunky knits and outerwear resembling a cross between ponchos and straight jackets. Rather than sleeves, they had zippers that opened up the sides to allow the arms to move. On other pieces, the placement of zippers seemed less functional, with some unfastening only to reveal gaping holes in sleeves, or to make the bottom portion of a jacket hang off the rest of the garment.

Takeaway: Aside from the ample adornments, Miyashita’s silhouettes were relatively basic. High-collared white shirts and slim-fitting black trousers made up the bulk of the collection, along with a range of outerwear and a romper and shorts that hit just below the knee. Overall, it was a cohesive and well edited offering.