Band T-shirts, Versace prints, Levi's 501 jeans and more came together to create a tribute to the rock 'n' roll spirit. 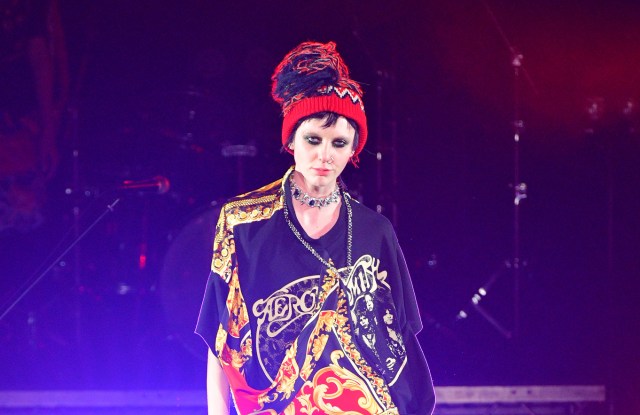 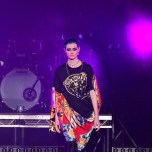 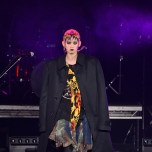 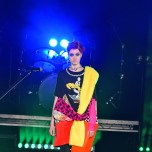 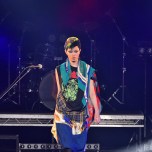 Junya Watanabe took a page out of rock ‘n’ roll history for his fall women’s offering, which he titled “Immortal Rock Spirit.” Fittingly, he staged his show at a live music performance hall, with laser lights flashing across the stage to a soundtrack that included tracks by Aerosmith, Queen, The Who, Kiss, Def Leppard and more.

Watanabe showed T-shirts from the same bands and others, which he paired with classic Levi’s 501 jeans from the years 1937, 1947, 1966 and 1976. The jeans were made in partnership with Levi’s under the Junya Watanabe Denim line. The designer also collaborated with Versace this season, selecting six of the Italian house’s iconic scarf prints and turning them into asymmetric, slouchy tops and ankle-length pleated skirts.

Silhouettes were oversize and casual, and most pieces were cobbled together from different fabrics and garments. Roomy men’s wear-inspired blazers with extra-wide shoulders had sleeves from flight jackets, while foil printed sweatshirts were made into pleated dresses. Punk hairstyles or knitted mohawk hats and heavy, buckled ankle boots in black, white or metallic shades completed the look.

The show offered a fun moment of escape from what has been difficult months for many. In a time when live music performances seem like a distant memory, Watanabe brought to life the magic of a great concert through the power of fashion.