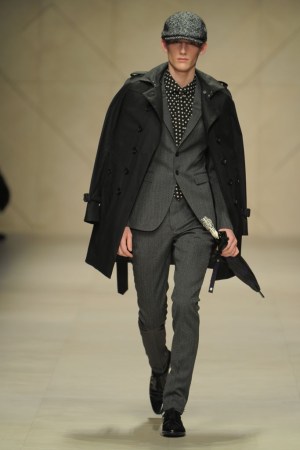 Thanks to TV shows like “Downton Abbey,” the dapper gentleman is all the rage with his closetful of natty patterns, tailored suits and, in the case of Burberry Prorsum, his umbrella with a hand-painted, owl-head handle. Chief creative officer Christopher Bailey said he wanted to marry British city and country dressing for a “polite and charming” collection that felt traditional, but also approachable and familiar. The collection, with its quirky charms, hit the spot. Bailey sent out a surfeit of form-fitting suits, which came in plum, olive or teal velvet or herringbone or tweed wool. He also worked velvet collars onto tweed trenches and topcoats, giving them a formal, Old-World feel. When he moved to the great outdoors, Bailey revisited classics such as the fishing vest — tossing a neat quilted version over a suit jacket — and crafted shooting jackets from leather or suede. Chunky sweaters worked double time as outerwear. Bailey peppered the collection with light touches, in the form of beaded appliqué fox heads on knits, leather gloves sprouting punky gold studs, and jaunty polka-dot neckties that would put a smile on the lips of even the most dour Englishman.