Domenico Dolce and Stefano Gabbana called their fall collection a “hymn to Italy.” 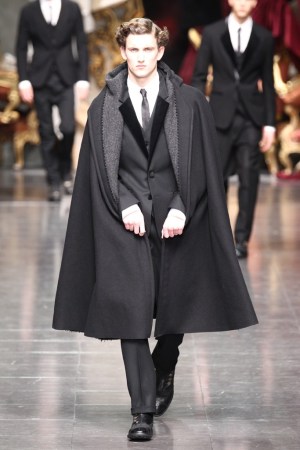 Domenico Dolce and Stefano Gabbana called their fall collection a “hymn to Italy,” and one of its initial inspirations was a dramatic old cape that belonged to Dolce’s father. Models walked briskly down the catwalk to recordings of Luciano Pavarotti blasting out Verdi arias. It was enough to put the audience in a mood for high drama, which is just what this charming — if at times overwrought — collection delivered. Jackets and coats came with velvet lapels and buttons; voluminous cape coats swooshed around models’ legs, and gold braiding and filigree embroidery were on trousers, capes, shearling jackets and coats. Printed silk pajama trousers swooshed from under gray overcoats. The gold and flourish recalled the duo’s Napoleon-inspired collection from fall 2006. The designers said they were responding to a mood among the youth of today. “The clothes have to have a history — it’s not about being retro, but they have to have had their own life. It’s about memories, familiarity — it’s comforting,” said Dolce. “The new generations want it, because novelty can be scary.”