The fall collection was fashioned from a cozy combination of tactile and patterned fabrics. 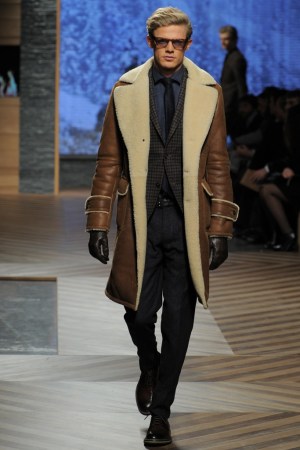 Self-indulgent rather than show-off luxury was how Anna Zegna, one of the family triumvirate that runs Ermenegildo Zegna, described this collection. “We didn’t want it to shout or even look too new,” said Zegna. “And we want it to embrace winter, sport and townwear.” Slim, three-piece suits and sport jackets were fashioned from cashmere woven into checks, chevrons and Glen plaids, giving the collection a preppy twist. For its younger, more streetwise customers, Zegna also showed off tailored suits made from pressed and pleated denim. Outerwear was a lesson in luxury, too, with voluminous puffer jackets covered in cashmere, lined in silk and stuffed with tufts of unspun cashmere, while leather jackets and coats had a softly quilted effect. Coats and trousers with a fuzzy texture and bouclé jackets were made from Spazzolino, a high-end brushed alpaca fabric introduced by the Italian mill Agnona, which Zegna now owns, in the Seventies, and updated.