The show set — a black rubber runway and a graffiti-stained door — foreshadowed that Raf Simons would once again be exploring darker fashion territory. 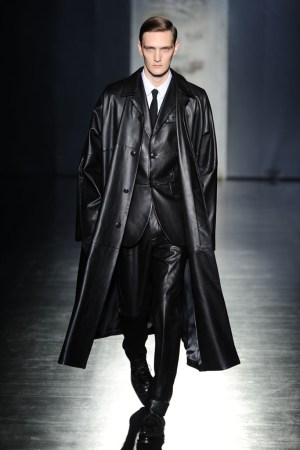 The show set — a black rubber runway and a graffiti-stained door — foreshadowed that Raf Simons would once again be exploring darker fashion territory. This nocturnal collection — with undercurrents of danger and kink reminiscent of “The Night Porter” — featured acres of black leather and other industrial-age fabrics glistening like car headlights on wet asphalt. It was another tour de force of tailoring for the Belgian designer, one of men’s wear’s most intrepid innovators, and still tipped as the front-runner to become the next couturier at Christian Dior in Paris. Simons said backstage he was keen to explore archetypal male clichés: the businessman, the father, the office nerd. Their wardrobes hinged on more formal fare: handsome greatcoats, sculpted suits with intricately seamed backs, and pristine shirts and ties. Simons made a convincing case for a variety of proportions, from pencil slim to voluminous and flaring. Longer line coats, either tightly cinched or hanging straight, were a major statement — and his loose leather peacoats and parkas were terrific. Asking if there was a bit too much black leather is like asking if The Village People liked disco. Only lunch-bag-shaped leather goods and sailor-suit flaps printed with childlike motifs of whales, fishes and dinosaurs added some levity. Still, Simons ignited the Milan men’s season with a directional, if divisive, show. Asked about those Dior rumors, the designer replied: “Nothing to say.”