This season, Bastian played up a masculine-feminine theme. 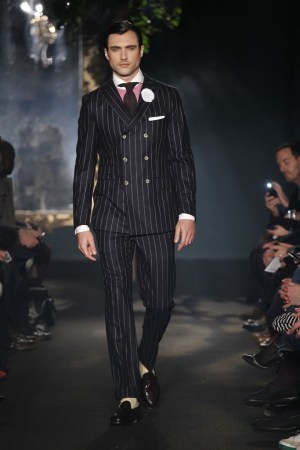 The first look Michael Bastian sent out was a chalk-stripe, double-breasted power suit. It was a nod to a major trend in Europe, but also a signal that Bastian, who is usually comfortable in the Americana arena, is thinking about his preppy aesthetic in a more continental way. The designer played up a masculine-feminine theme, from body-conscious looks that hugged the models’ physiques to the full makeup that appeared on several of them. The new direction was underscored with cutesy sweaters, including one with a Charlie Brown zigzag and two others with dog motifs. He also softened tougher pieces like a burgundy leather jacket with pinstripe pants and purple socks.