Not one to forget his British roots, Spurr turned to Robert Frank’s photographs of London for inspiration. 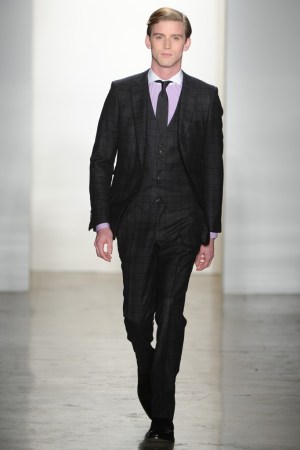 Not one to forget his British roots, Simon Spurr turned to Robert Frank’s photographs of London for inspiration. His first look — a formfitting three-piece shadow windowpane suit — continued the case for the dressed-up man that’s been all over the runways this season. In Spurr’s hands, it became edgy, youthful and relevant, with several military touches. He played with different textures, including leather contrast sleeves on a brown wool coat, and amped up the across-the-pond flavor with an oversize houndstooth pattern for a sleek suit with a peak lapel — think Austin Powers on a fun romp. And while this collection may have lacked some of the energy of seasons past, his impeccable tailoring skills proved, once again, that the designer is a cut above the rest.