Look elsewhere for that tired maxim, “preppie with a twist,” which for fall was banished in favor of a sleek, urbane take on military motifs. 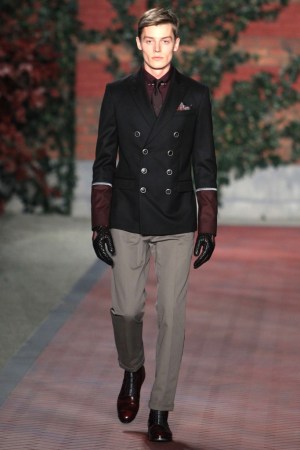 Look elsewhere than Tommy Hilfiger for that tired maxim, “preppie with a twist,” which for fall was banished in favor of a sleek, urbane take on military motifs. Trim peacoats and melton double-breasted officer’s coats set the tone, as did shimmering epaulettes on shirts, glimmering bullion trim on the sleeves of sportcoats and braided stripes on trousers. Martial references have been rampant this season, but Hilfiger’s aim was dead-on, with a grand setting in a sylvan military academy constructed within the cavernous Park Avenue Armory.

“Cadet Academy” was the official theme, but Hilfiger’s plebes are apparently granted some time off to indulge in glam rock, equestrian activities and sports. Varsity jackets were luxed up with quilted leather sleeves while laser-cut motorcycle jackets and shearling great coats with metallic trim injected a note of rebellion into the polished and disciplined mood of the proceedings. Macy’s chief executive officer Terry J. Lundgren sat front-and-center at the show — along with Bradley Cooper and the New York Giant’s Victor Cruz.