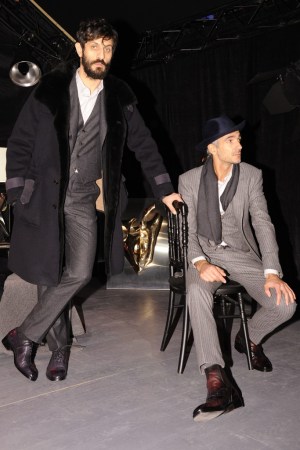 PARIS — “The shoes are judging us!” Antoine Arnault declared Friday night as he unveiled Berluti’s transformation from a cult cobbler to a luxury men’s wear brand with global ambitions.

He was referring to the quirky installation at the Ecole des Beaux-Arts, with footwear occupying rows of chairs lined up as if for a fashion show. But he also could have been summing up the mission of Alessandro Sartori, the former Z Zegna designer tapped to summon a fashion vision for a brand that, since 1895, has been focused below the ankles.

It was an impressive debut. Sartori’s collection was worn by a multigenerational cast of models in vignettes that telegraphed the Berluti lifestyle: playing chess in the library of a country chateau; having cocktails in a groovy apartment; gathering with friends under a full moon for a midnight shoe-polishing party, with Dom Pérignon as the shining agent (something serious Berluti devotees actually do).

The dusty colors and scratched patinas of the shoes, applied to clothes, gave them an old-school, lived-in feel that was juxtaposed with modern proportions. “It’s young, it’s cool, but it’s also timeless,” Sartori said.

Arnault, who took the management helm of Berluti a year ago after a stint at Louis Vuitton, has big ambitions for the Paris-based label. He said he plans to double the size of the store network, currently numbering 35 locations, in the medium term. “This brand was mythical,” Arnault mused, “and we’re going to make it shine again.”