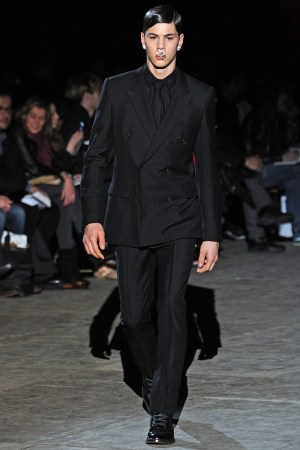 The jaw-dropping venue — a clear tent at the foot of the glowing gold cupola at Les Invalides — wrong-footed the audience. Riccardo Tisci had America, and Minotaurs, on his mind. He unfurled another high-energy, sexually charged show, the spotlights glinting off embellished nose rings as models charged through the giant show space. The collection, however, found Tisci in something of a holding pattern. He eased up on prints, focusing mainly on bold stars and stripes borrowed from Old Glory to decorate his signature T-shirts and sweatshirts. These were often shown over kilts and leather leggings, recalling earlier runway outings. After only seven seasons doing Givenchy men’s wear, perhaps it was wise for Tisci to take stock of his calling cards. The tailoring was black and red and chic all over; the outerwear made distinctive via trompe l’oeil layers, such as peacoatlike vests over leather jackets. The show climaxed with something new from one of fashion’s dark lords: sparkle. The tops of white shirts twinkled with crystals, while black enamel stars came out over sweaters.