Stefano Pilati served up a younger take on chic dressing, with undercurrents of sex and aggression. 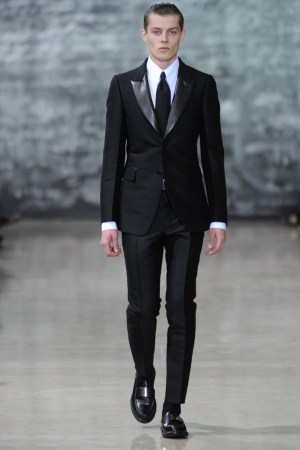 Stefano Pilati served up a younger take on chic dressing, with undercurrents of sex and aggression. His power suits were toughened up with biker jacket details and ultrasharp proportions. The opening tuxedo with peak lapels in gleaming leather was superb and set the tone for one of Pilati’s strongest men’s shows in years. Leather panels added rigor and a hard edge to wool coats, carrot-shaped flannel pants and sweaters. Pilati nailed the mixed-media trend so prevalent in Europe. Outerwear, which was mainly variations on the biker jacket, came worked in black wool, leather and sheepskin. There were some classic styles, too, such as a gray flannel double-breasted coat with intricate seaming. The Mapplethorpe-esque leather ensembles were over the top: All they needed was a leather cap to slip into S&M territory. Otherwise, this directional, cohesive and masculine collection was right on the money.