Skinny suits, topcoats and narrow pants were at the heart, while leather-trimmed toggle coats and large herringbone-printed scarves added interest. 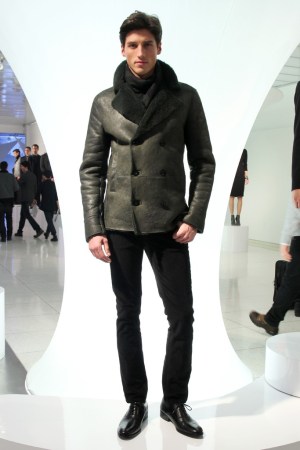 For Elie Tahari’s fall presentation, artist Gisela Stromeyer’s sculptural tent installations were lit from within and placed around the interior of the designer’s Fifth Avenue flagship. Tahari said they were the perfect backdrop to his Urban Winter collection, which came to him while thinking about frozen snowy tundras colliding with modern life. Save for a funnel-neck blouse or two, there wasn’t a lick of white here, but the clothes did offer a sense of protection, from the lush shearling coats in black and rich green, to the pretty skating coats and skirts that would look lovely gliding across a frozen pond. While the collection was outerwear-heavy, there were some lady-killer dresses in splash-art prints and versions in leather and wool combos.

For his Elie Tahari man, the designer continued on that same aesthetic, but sprinkled military references throughout. Skinny suits, topcoats and narrow pants were at the heart, while leather-trimmed toggle coats and large herringbone-printed scarves added interest.

This collection demonstrated that Tahari has a recharged engine as he looks to build on his creative and commercial power base.