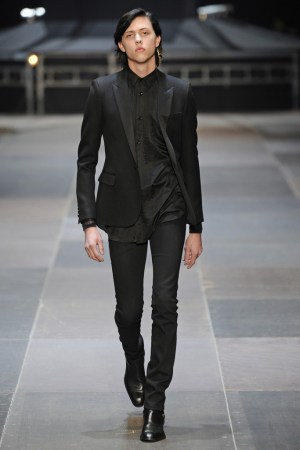 Hedi Slimane is fashion’s man of the hour. His first designs for Saint Laurent are arriving in boutiques around the world this month, and on Sunday night, he staged his first men’s show since 2007, when he exited Dior Homme, and with his impact on male fashion — stick-to-the-ribs tailoring, low-slung jeans — reverberating still.

As with his women’s wear debut last October, Slimane did not set out to reinvent or jolt men’s fashion, but rather to reclaim what is his, and what belongs to the great house of Yves Saint Laurent.

He did not stray far from the skinny rocker look he pioneered during his Dior Homme days, amplifying it with more color, pattern and grit. And while YSL has a fuzzy men’s wear legacy, Slimane has made his mission clear: He renamed the collection and stores Saint Laurent to capture the impulses that inspired the founder to launch a ready-to-wear line in 1966 — among them youth, freedom and modernity.

With an amusement-park ride outfitted with speakers spinning and flashing in the background, Slimane sent out a collection that crackled with the energy and enduring cool of rock music. If it felt particularly raw and authentic, it’s because Slimane cast a range of real musicians from bands from as far afield as Buckinghamshire, England, and his new hometown of Los Angeles. The first rocker out — pale and gaunt — pointed his Adam’s apple at the photographers and strode out in a lean tuxedo and black shirt, as cocky as Mick Jagger.

Business suits had no place on this stage. Instead, the designer reminded us of his tailoring prowess with a surfeit of slim-line Chesterfields, peacoats and handsome shearlings, a hoodie invariably worn underneath.

If Coachella ever hosts a winter edition, this is how the smart kids would want to look.