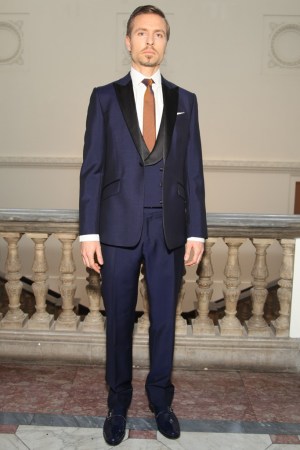 Duchamp celebrates its 25th anniversary this year. Originally a traditional British accessories label (notwithstanding the fact that it was named after French surrealist artist Marcel Duchamp), it has recently transitioned into ready-to-wear — appointing Scottish/Italian designer Gianni Colarossi to spearhead it. “It’s all about introducing Duchamp as a clothing brand now,” said chief executive officer Marc Psarolis. Their debut presentation took the modern dandy as its focus. Key pieces came in the shape of Harris tweed jackets, contemporary check flannel suits and even a monochrome polka dot jacket. Eveningwear was all about the velvet tuxedo and in particular, one in vibrant peacock blue. The accessory offering featured shirts in gingham and paisley with ties and bow ties in both paisley and crochet. As for the staging, the collection was showcased by three sets of suitably dandy-esque actors playing poker, chess and engaging in Bartitsu — a cross between jufitsu and fencing (using walking canes instead of swords) that was immortalised in the work of Sir Arthur Conan Doyle.