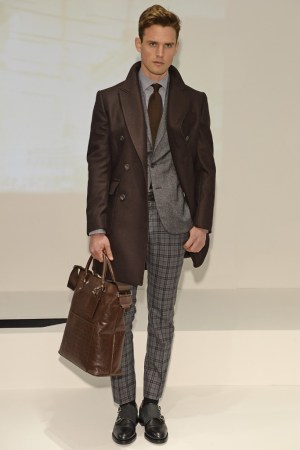 A dig through the Hardy Amies archives turned up a military report card from Sir Hardy’s time spent as a covert operative in World War II. It referred to the “precious appearance and manner” he kept up in his Savile Row-tailored uniform, nods to which were confidently made by design director Mehmet Ali in military-influenced outerwear, in particular the patch and bluff pockets that featured on peacoats, Harrington jackets, cropped blazers, an evening overcoat and a reversible bridge coat in a check with nylon facing.

The graphic “HA” monogram designed in the Sixties by interior designer William Haines appeared embossed in leather under the collar of a peacoat or on tote bags, woven into the linings of suits and in gray or navy silk jacquard tuxedo blazers. The classic fabrics were in a muted palette, and denim made its debut in a slim-fit style in two dark washes. The shoes — nubuck and pebble-grain leather double monks and tasseled loafers — were the product of an ongoing collaboration with Grenson.