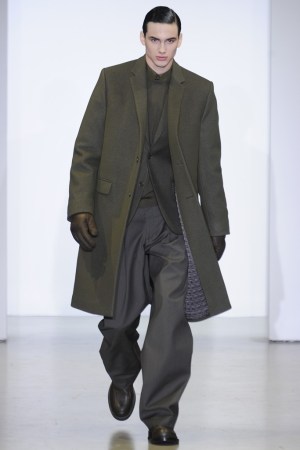 What’s next after designer parody T-shirts? According to men’s creative director Italo Zucchelli, it may well be designer fragrance slogans. Oversize sweatshirts plastered with the words “Eternity,” “Obsession” or “Escape” had collector’s item written all over them.

Oddities in the collection included wide-legged lamé trousers and a desert’s worth of head-to-toe looks in an offbeat camel shade the press notes anointed “sable.”

The show had a heroic mood, and ended with a run of strong-shouldered yet body-conscious tailoring, including terrific tuxedos in one of the shades of the season: charcoal gray.