The design duo staged a dynamic show serving up a series of strong denim looks, including mixed-media coats and suit jackets. 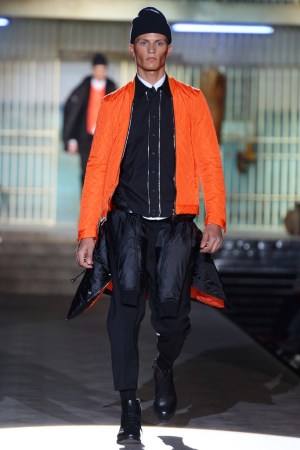 With police sirens wailing and dogs barking on the soundtrack, a guy in a straitjacket was dragged to his cell. Then, the doors of a two-storied jailhouse set opened, releasing models dressed in heavy bomber jackets and quilted T-shirts blaring the slogan “Caten’s Penitentiary.”

You can’t say Dan and Dean Caten don’t know how to have fun. The design duo staged a dynamic show serving up a series of strong denim looks, including mixed-media coats and suit jackets matched with roomy rolled-up jeans.

There were also some crazy hybrids, such as padded nylon jackets zipped onto suit tops, just until the inmates got a day off and hit town. For that outing, they donned laser-cut leather or soft woolen coats with roomy pockets, exchanging denim for tailored pants with a rebel edge.