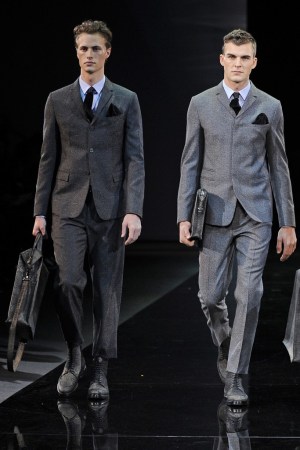 Lots of faux fur headlined a punchy Emporio collection that also hinged on skinny tailored silhouettes and curve-hugging knits. Giorgio Armani said he wanted to resurrect an image of youth that’s been lost, referring to the boyish four-button suit jackets with small lapels, and trousers cropped at the ankle, all of which had an early-20th-century collegiate feel.

“When guys put these suits on, they feel like young princes,” the designer said. The show was brimming with outerwear, too, but with fur replacing down. “I’ve had enough of puffers — they’ve reached their limit,” Armani declared.

While all the shearling was real, other furs were made from fabric such as wool; there was an astrakhan overcoat, and stacks of shaggy and smooth panels and details on sweaters and jackets.