Space, the final frontier — and a nifty theme for Stefano Pilati’s sophomore effort at the brand. 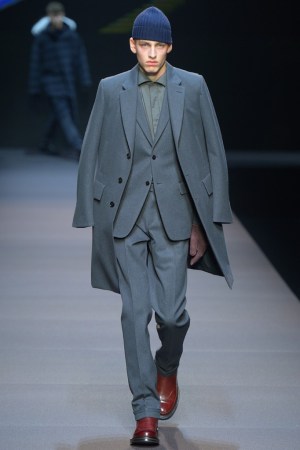 Space, the final frontier — and a nifty theme for Stefano Pilati’s sophomore effort at Ermenegildo Zegna. Is Milan the center of the men’s wear universe? Pilati’s mesmerizing video backdrop — depicting a journey from the outer reaches of the cosmos to the site of the 2015 universal exhibition — seemed to say, “Assolutamente.”

The designer’s polished collection held its own in front of the swirling universe, realized with the help of an astrophysicist and a professor of acoustic astronomy (whatever that is). It ying-ed and yang-ed between cosmonaut futurism — hefty woolen parkas, bubble-shaped quilted bombers and gleaming crocodile moon boots — and English countryside, echoed in muted plaids and checks in forest tones, Norfolk belts on trim topcoats and cozy, scarf-neck sweaters.

Pilati has always had a knack for oversized coats, and he paraded a bounty of them, from a cocooning, pebbled gray pea coat to a languid, hooded style in black double-face cashmere, bringing to mind Darth Vader on an oligarch’s budget. The fabrics ozed luxury and ranged from textured, pinstriped wool for vaguely Mod car coats to pure vicuna flannel for trim tailoring.

Pilati paraded a bounty of oversize coats while the fabrics oozed luxury. During a preview, Pilati said he wanted to “give majesty to the event” with his multimedia presentation. Mission accomplished.