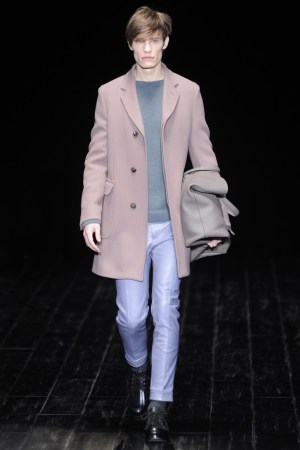 “I wanted a lighter atmosphere,” Giannini said backstage, showing off baby blue napa leather pants and shirts, plus an inspiration board pinned with portraits of Rudolf Nureyev by David Bailey. Sailor caps on many models telegraphed the reference, adding a groovy, retro aspect to her clean-lined silhouettes.

Outerwear was terrific. Foam and Neoprene often backed fuzzy wools and smooth leathers, accentuating the shape of boxy overcoats or tubular biker jackets. By contrast, leather duffel bags and totes were soft and unlined, clutched at the hip.

Giannini chose Alain Delon Jr., son of the iconic French actor, to close her sleek and confident show, describing the budding film star as the modern torchbearer of that rebellious Sixties spirit.