Prada bucked Milan’s monochromatic trend, and turned her back on prints, mixing offbeat colors and giving them verve and individuality. 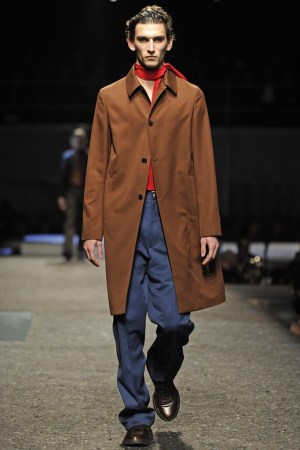 Trust Miuccia Prada to deliver food for thought alongside a healthy serving of fashion. Her Milan men’s show — with a helping of women’s pre-fall that focused on languid, sexy shapes, leather and see-through fabrics — delivered plenty of both, referencing European culture from the Weimar period up through the early Eighties.

Backstage, Prada said the moody, industrial set — a multitiered platform of steel and dark felt, ringed by metal scaffolding — was to evoke a theater, underscored by musical excerpts from Pina Bausch dance performances.

The eclectic soundtrack — lurching between Nina Hagen, German music from the Thirties and live jazz — was echoed in the freewheeling mix of fashion moods. There were shades of Seventies tourists and androgynous rockers in clothes that bridged the athletic and the formal.

Prada bucked Milan’s monochromatic trend and turned her back on prints, mixing offbeat colors like powder blue, violet or cinnamon in almost every outfit, giving them verve and individuality. Once again she proved that she marches to her own beat.