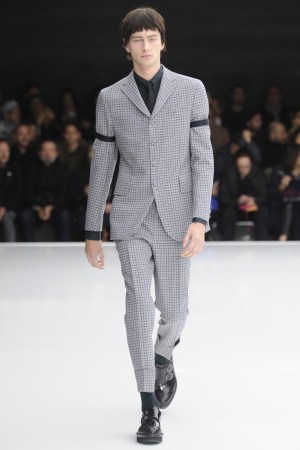 Paul Surridge is the latest designer in Milan to endorse four-button jackets, which had a youthful zing in checked fabrics resembling graph paper, or a “Tron” racing grid. Turtlenecks underneath made them even more Mod.

Outerwear veered from the theme, most of it hefty and gently trapeze-shaped. There were hooded puffers and woolen topcoats with dropped shoulders and jutting, caped backs. The latter looked terrific in broad, vertical stripes of gray and navy, or blurred, fuzzy checks.

While the futuristic set and pulsing techno were reminiscent of designer Surridge’s alma mater — Jil Sander — the show was energetic and directional.